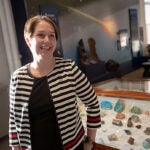 How Earth was watered

Increasing the number of calories consumed by patients with amyotrophic lateral sclerosis (ALS) may be a relatively simple way of extending their survival. A phase 2 clinical trial led by physicians at Harvard-affiliated Massachusetts General Hospital (MGH) found that ALS patients receiving a high-calorie, high-carbohydrate tube-feeding formula lived longer, and with fewer adverse events, than participants who received a standard formula designed maintain their weight. While the results need to be interpreted with caution because of the small size of the trial, the authors are optimistic that improved nutrition could make a significant difference for patients with ALS.

“We are particularly excited because these results provide the first preliminary evidence that a dietary intervention may improve life expectancy in ALS, and they are strongly supported by epidemiological and animal data,” said Anne-Marie Wills of the MGH Department of Neurology and Neurological Clinical Research Institute (NCRI), corresponding author of the paper, which has been published online in The Lancet. “This strategy has never been tested before in ALS, and we are optimistic that it may provide a new, effective, and inexpensive therapy for this devastating illness.”

Also known as Lou Gehrig’s disease, ALS is a progressive neurodegenerative disease affecting motor neurons in the brain and spinal cord. Death of these nerve cells stops the transmission of neural impulses to muscle fibers, leading to weakness, paralysis, and usually death from respiratory failure. ALS patients typically lose a significant amount of weight, both because their muscles atrophy from disuse and because they are physically unable to consume enough calories to maintain weight. Recent studies suggest that reduced appetite and an elevated metabolic level may also contribute to weight loss. Supplementary nutrition via a tube passing directly into the stomach is usually recommended as the disease progresses, although there is little consensus about when tube feeding should begin.

More than 15 years ago it was observed that malnutrition was associated with shorter survival in ALS patients, and many subsequent studies confirmed that patients who weighed more appeared to live longer and have slower disease progression. Studies in a mouse model of ALS found that those on a high-calorie, high-fat diet gained weight and survived longer than those on a normal diet. The current study was designed primarily to test the safety and tolerability of high-calorie nutritional formulas — with or without the excess fats included in the mouse study — in patients with advanced ALS.

Carried out at 12 centers across the United States, the study enrolled 24 ALS patients who had lost a significant percentage of their original body weight and were receiving nutrition via tube feeding. Participants were randomly divided into three groups:  a control group receiving a nutritional formula designed for weight stability and two groups receiving formulas designed to provide 125 percent of the calories needed to maintain their weight. One of the high-calorie formulas was high in fats, the other was high in carbohydrates. During the four-month intervention period, participants recorded their tube-feeding intake, along with anything they were able to consume by mouth, and weekly measures of weight. At monthly study visits, measurements were taken of participants’ fat and lean body mass; blood levels of cholesterol, insulin, and other factors that could be affected by nutrition; and functions typically compromised by ALS.

At the end of the intervention period, none of the eight participants receiving the high-carbohydrate formula had withdrawn because of adverse events, while one of the six on the high-fat formula and three of the six in the control group discontinued participation because of adverse events.  (Four of those who originally enrolled dropped out before the intervention began.) Those on the high-carbohydrate formula also gained a modest amount of weight, while control-group participants maintained their weight. Participants receiving the high-fat formula actually lost weight, even though they had taken in more than 150 percent of the calories estimated to maintain their weight.

During the five-month follow-up period after the intervention, none of those in the high-carbohydrate group died, but one in the high-fat group and three in the control group died, all from respiratory failure. Participants in the high-carbohydrate group also had a slower drop in their functional scores than the control group, although the difference was not statistically significant.  None of the adverse events that occurred in either of the high-calorie groups were cardiovascular; the high-fat formula was not associated with increases in cholesterol, and neither of the high-calorie diets caused abnormal blood glucose or insulin levels.

“While it’s not possible to make clinical recommendations based on this single, small study, I think the results support the importance of avoiding weight loss in this disease,” said Wills, an assistant professor of neurology at Harvard Medical School. “We’re hoping to obtain funding for a large study of whether nutrition counseling to encourage weight gain — something not currently covered by health insurers — can help slow the progression of ALS, and I’m optimistic that interventions designed to maintain or increase weight could be even more effective if started before patients have lost a significant amount of weight.”