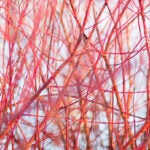 At the Arboretum, an unquiet winter

After 26 years of workdays spent watching bacteria multiply, Richard Lenski has learned a thing or two.

He’s learned that naturalist Charles Darwin was wrong about some things. For one, evolution doesn’t always occur in steps so slow and steady that changes can’t be observed.

Lenski also learned that a laboratory freezer can function as a time machine.

A professor at Michigan State University, Lenski has watched E. coli bacteria multiply through 59,000 generations, a span that has allowed him to observe evolution in real time. Since his Long-Term Experimental Evolution Project began in 1988, the bacteria have doubled in size, begun to mutate more quickly, and become more efficient at using the glucose in the solution where they’re grown.

More strikingly, however, he found that one of the 12 bacterial lines he has maintained has developed into what he believes is a new species, able to use a compound in the solution called citrate — a derivative of citric acid, like that found in some fruit — for food.

Lenski described his groundbreaking work at Harvard’s Mineralogical and Geological Museum on Wednesday during a talk sponsored by the Harvard Museum of Natural History, one of the Harvard Museums of Science & Culture (HMSC).

His presentation, “Time Travel in Experimental Evolution,” was introduced by HMSC executive director Jane Pickering and by Jonathan Losos, the Monique and Philip Lehner Professor for the Study of Latin America and curator of herpetology in the Museum of Comparative Zoology.

Losos, who studies the behavior and evolution of Anolis lizards on Caribbean islands, called Lenski’s long-running work “simply extraordinary” and said that his approach has been adopted by other researchers around the world.

Losos said Lenski’s talk was particularly appropriate because it occurred on the 205th anniversary of Darwin’s birth. In the spirit of the ongoing Olympics, Losos said that if there were ever an all-star team of evolutionary biologists, Lenski would be its captain.

While the ability to observe creatures with short reproductive times over thousands of generations has brought insights, Lenski said it was the use of the laboratory freezer that allowed the work to cross from observation into experimentation.

Researchers periodically froze samples of E. coli, and because the frozen bacteria remained viable, scientists interested in particular evolutionary developments could directly compare modern populations against their ancestors. In addition, the development of cheap, accurate ways to analyze the genome has given researchers better analytical tools.

One of the central questions Lenski has explored is the tension between evolution’s opposing forces: the random mutations that initiate genetic change and the natural selection that shapes which mutations survive. Those forces, Lenski said, provide evolutionary pressure in different directions.

The experiment has run according to the same protocol since it began. E. coli bacteria are grown in the solution of glucose, a kind of sugar. The glucose is carefully measured so it eventually runs out and creates a period of scarcity and starvation before the bacteria are propagated the next day and transferred into a fresh solution. Every 75 days, roughly 500 generations, a portion of the cultures is frozen.

Though the bacteria were originally genetically identical, they have evolved. Today’s populations grow roughly 80 percent faster than the original lines, a development that Lenski called “a beautiful example of adaptation by natural selection.”

An analysis of the 12 lines after 20,000 generations showed 45 mutations from the ancestral population among the bacteria’s roughly 4,000 genes. Many of the same genes were mutated in all lines, but it was rarely exactly the same mutation within the genes, Lenski said. He equated the bacteria’s evolutionary feats in the glucose-limited “flask world” with those of mountain climbers finding other routes to the peak.

“Populations are climbing Mount Glucose in similar, though not identical, ways,” Lenski said.

After 30,000 generations, researchers noticed something strange. One population had evolved the ability to use a different carbon-based molecule in the solution, called citrate, as a power source.

Researchers wondered whether it was the result of a rare, single mutation, or a more complex change involving a series of mutations over generations. To find out, one of Lenski’s postdocs, Zachary Blount, took some of the frozen cells and grew them in a culture lacking glucose, with citrate as the only potential food source.

After testing 10 trillion ancestral cells from early generations, he got no growth. But when he tested cells from the 20,000th generation on, he began to get results, eventually finding 19 mutants that could use citrate as a power source. The results showed that the citrate-eating mutation was most likely not the result of a single mutation, but one enabled by multiple changes over 20,000 generations.

In further testing to determine if the new bacteria were different enough to qualify as a new species, Lenski’s researchers found that beyond changes to the genes responsible for glucose and citrate consumption, other changes had occurred in the organism that had made it less fit to survive in a glucose-only environment,

“We find they are getting less fit in the ancestral niche over time,” Lenski said. “I would argue that citrate users are — or are becoming — a new species.”

Lenski said he’d like to see the experiment continue in the future, even after he has retired, because the bacteria continue to surprise.

“I call this the experiment that keeps on giving, because the bacteria continue to do interesting things,” Lenski said. “I’d like this experiment to continue long after I’m gone.”