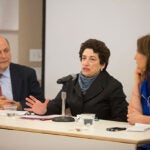 Scientists have studied crystallization since the time of Galileo, so it’s easy to imagine there’s nothing new to learn about the process.

A new study has uncovered a previously unseen phenomenon — that curved surfaces can dramatically alter the shape of crystals as they form. The finding could have applications ranging from applying coatings to nanoparticles used in industry to aiding in drug delivery, and may even help shed light on how viruses assemble. The work, conducted by researchers at Harvard’s Materials Research Science and Engineering Center and funded by the National Science Foundation, is described in a Feb. 7 paper in Science.

To investigate how curved surfaces affect crystallization, Vinothan Manoharan, the Gordon McKay Professor of Chemical Engineering and a professor of physics, worked with physics postdoc Guangnan Meng to develop a system in which nanoscale colloidal particles were injected into water droplets. As the particles — about 10,000 times larger than atoms or molecules — organized themselves into crystalline structures, researchers were able to observe the process in real time.

“If you have the particles on a flat surface, like a piece of glass, they form a regular lattice, and they’re compact, with no preferred direction for crystal growth,” Manoharan said. “On a curved surface, however, they form a very different pattern. It looks like strips — almost like ribbons — and they branch out from different points.”

Importantly, Manoharan said, researchers found that changing the curvature of the surface — by changing the radius of the water droplet — resulted in changes to the crystalized “ribbons.”

A time-lapse video of a crystal growing on a water droplet, as seen through a confocal microscope. The crystal is composed of colloidal particles 1 micrometer in diameter (about 1/100 the width of a human hair, and 10,000 times larger than an atom). On a flat surface, the small growing crystallites could merge together to form a large domain, but on the curved surface of the droplet, the pieces cannot fit together — just as strips cut from a sheet of paper cannot perfectly cover a ball. As a result, the crystal forms ribbonlike domains that branch from one another. Guangnan Meng/Harvard University

“As the droplet gets less curved, the width of those ribbons gets bigger,” he explained. “That was one of the hints that what we were seeing was the result of the curvature.”

Manoharan stressed that for the new process to work, the crystals need to be able to “feel” the curvature of the structure they grow on.

“This may not occur when we look at crystals made from atoms or molecules because the atoms and molecules are so small compared to the curved surface — they will not feel the curve, just like we don’t feel the curvature of the Earth when we walk around,” he said. “But if you had an atomic or molecular crystal growing on a nanoscale object, then it’s likely it would feel the curve, and when we looked at the literature, we were surprised to find reports of patterns in nanoscale crystals that look a great deal like the structures we saw.”

Though the crystals’ appearance initially seemed similar to that found in snowflakes, Manoharan and Meng believe crystals on curved surfaces form through an entirely different process. The distinctive structure of snowflakes occurs, in part, due to the fact that the crystals form extremely fast, meaning water molecules don’t have time to form more compact structures. By comparison, the crystals created in water droplets by the Harvard team in some cases took hours to form.

“The reason we see these structures is similar to the reason it’s impossible to accurately depict the surface of the Earth on a flat, two-dimensional map,” Manoharan said. “The analogy I like to use is that the crystals are like pieces of paper and you’re trying to somehow use them to gift-wrap a basketball.”

Unlike paper, though, the crystals Manoharan’s team created can’t be creased, and they’re far too brittle to stretch across a curved surface. The result, he said, is that they tear, creating the ribbon structure.

Understanding how the process works could prove invaluable in a host of industrial and pharmaceutical applications.

“Nanoparticles are used in a number of different industries — they can be coated with metals for industrial use, or they can be coated to allow them to enter cells for drug delivery,” he said. “If that coating has some crystallinity to it, our results suggest that it may adopt patterns like those we see here.”

The newly discovered crystallization process might also someday inform study of the mechanics of how the protein shells of viruses assemble.

“Viruses are essentially shells of protein that encapsulate some genetic material,” he said. “One of the open questions in virology today is how that protein shell goes from a disordered state to form the viral capsule, and it’s possible this process we discovered may inform our understanding of that self-assembly process. Of course, in the long term, our hope is that if we can understand that process, we may eventually be able to interrupt it.”