Cool with a capital C 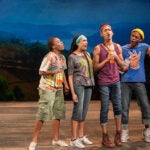 A musical is born, slowly

Fresh off his January stint as host of the Grammy Awards, hip-hop star and actor LL Cool J came to Harvard over the weekend, pulling double duty as host of the Cultural Rhythms festival and the Harvard Foundation’s Artist of the Year.

“We’ve made a great choice this year,” announced S. Allen Counter, director of the Harvard Foundation, in bestowing LL Cool J with the honor, given for the entertainer’s philanthropy through the Jumpstart program and his work with his charity Jump & Ball.

“There’s been no one more committed to young people’s education than LL Cool J,” Counter said. “He’s been an outstanding role model.”

Accepting the award, LL Cool J — born James Todd Smith — said, “I’m honored and flattered. Me being here is representative of something truly magnificent about our country. This is proof that if you truly have faith … you can become anything you want to become.”

A two-time Grammy winner and a regular on the television show “NCIS: Los Angeles,” he spoke about his youth in Queens, N.Y. “Whether you’re wealthy or you come from meager beginnings, it’s all about creativity,” he said.” You’re the architect of your life. Make sure the blueprint is right, and build well.”

As host of Cultural Rhythms, LL Cool J did not disappoint.

“I’m like the Dave Letterman of Harvard!” he joked.

The festival, which unites Harvard performance groups drawing from cultures around the globe, was held Saturday at Sanders Theatre.

“Today we gather to celebrate exactly what makes us different,” said the show’s co-director, Aubrey Walker ‘15.

Echoed co-director Soyoung Kim ’14, “Cultural Rhythms is that one time of year where everyone comes together.”

Impressed with the talent and generosity of the students, who presented him with a Harvard sweatshirt and a special performance to a medley of his songs, LL Cool J said the arts are alive and well at the School.

“This is truly amazing,” he said. “Hey, Harvard, guess what? You’re cool!”