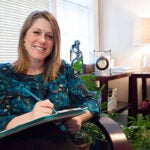 Students hear from leaders in the field at SEAS conference

Young women studying computer science were introduced to a group of potential role models as part of a weekend conference at the School of Engineering and Applied Sciences (SEAS).

The event, organized by Harvard Women in Computer Science, drew some of the most successful women in the field, along with sponsors such as Google, Facebook, and Microsoft. It included keynote speeches from entrepreneurs and senior executives, mentoring lunches, and an eight-hour “hackathon” Sunday at the Harvard Innovation Lab. Students from 40 U.S. colleges and universities were in attendance.

“When I was growing up, I thought the gender war was over and women had won. But it’s still not over,” said Amy Yin ’14, co-founder of Harvard Women in Computer Science.

“The biases may be more subtle now, but the statistics are not. When I interned at Facebook last summer, I was the only woman on a team of 12,” added Yin, who is concentrating in computer science. “There’s a saying that ‘If you can’t see it, you can’t be it,’ which is why we wanted to develop a community of women in computer science.”

The first keynote speaker was Rebecca Parsons, chief technology officer at ThoughtWorks, a Chicago-based software design firm. “Women bring a different perspective to solving problems,” said Parsons, who noted remarkable progress toward inclusiveness in her three decades in the field — which wasn’t to say the work is over.

“I was told when I was in school that women were incapable of understanding math and science,” she said. “Today, saying something like that simply isn’t socially acceptable.

“The biggest challenge now is that people may not fully recognize the kinds of subtle biases that still exist. When hiring, for example, people tend to look for someone like them, people they’re comfortable with.” This works against women. “If we can make talking about bias less charged, we’ll be much better off.”

Margo I. Seltzer, the Herchel Smith Professor of Computer Science at SEAS, offered a similar viewpoint. “Underrepresentation leads to continued underrepresentation,” she said. “We all need to work toward making our workplaces and communities more welcoming.”

Still, Seltzer has seen big advances at Harvard, where 28 percent of current computer science concentrators are women (the national average is 20 percent). “We’re delighted to see increased participation by women in our courses and concentration. I don’t think the problem is solved, but the messaging that all are welcome does seem to be helping.”

Yin believes that eradicating cultural stereotypes about women and technology is a key part of the equation. “Harvard is doing a lot to encourage women to get into technology, and to be more technical in general,” she said. “It’s great, because a lot of women think you can’t be social if you’re in computer science, that people will stigmatize you as a nerd, that guys will be intimidated by you, that you won’t find a boyfriend or a husband.”

And men need to be part of the solution, too, she said: “We’re about to start an ‘allies’ program based on what Harvard Business School has done. We want to get men involved in discussing their perceptions about women in computer science. We need to talk about gender-related problems, like why only 7 percent of venture capitalists are women and how this impacts what companies get funded.”

David C. Parkes, the George F. Colony Professor of Computer Science and area dean for computer science, is focused on the work ahead: “We’ve managed to close the gender gap a bit, but I think I speak for all my colleagues when I say that we won’t be happy until” the gap is gone.

Parkes, who helped judge the hackathon, pointed to the growing number of women in Harvard’s introductory programming course, CS 50. Women filled 37 percent of the seats in CS 50 this year — an all-time high. “Our target for the entire concentration must be 50 percent,” he said.

Bringing more women to engineering and computer science is a priority for Dean Cherry A. Murray of SEAS. “We are creating a curriculum that is encouraging and embracing people from diverse backgrounds, rather than the traditional engineering school’s ‘weeding out’ atmosphere,” said Murray, who is also the John A. and Elizabeth S. Armstrong Professor of Engineering and Applied Sciences and a professor of physics. “We have seen an increase of over a factor of two in the percentage of women concentrating in computer science in the last five years, which I celebrate, but we’re aiming higher — to complete parity — because we want the very best minds coming into the field.”

Stanford computer science graduate Kimber Lockhart delivered the second keynote speech Saturday at the Science Center. Increo Solutions, Lockhart’s start-up firm, was acquired in 2009 by Box, a Silicon Valley company with a valuation of more than $1 billion. Just six years out of college, she is now senior vice president at Box, where she leads software engineering teams.

“I hope many of you become software engineers because you want to change the world that way,” Lockhart said. “I am sometimes unable to build diverse teams because of so many women opting out” of software engineering. When Lockhart asked who in the packed house was interested in launching a start-up, about half the audience raised their hands.

A young woman asked Lockhart how to overcome the “impostor syndrome,” an internalized feeling that women simply don’t belong in tech. Lockhart acknowledged its existence, but added, “You need to make decisions as if it weren’t there,” because “once you get in the door, you’ll be able to learn” everything you need.