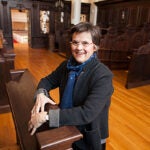 “After an early action group that featured remarkable academic and extracurricular excellence and unparalleled ethnic and economic diversity, we are delighted to have a regular application pool that promises more great things for the Class of 2018,” said William R. Fitzsimmons, dean of admissions and financial aid. “Harvard’s revolutionary financial aid program has again played a pivotal role in attracting the nation’s and the world’s most promising students to apply to Harvard.

“And news about the high priority of financial aid in the Harvard’s Campaign for Arts and Sciences — with a $600 million goal — has been reassuring to students and families about Harvard’s core value of providing access to Harvard for outstanding students from all economic backgrounds,” Fitzsimmons added.

“The leadership of President Drew Faust and Dean of the Faculty of Arts and Sciences Michael Smith means a great deal to current and future undergraduates who need financial aid to attend Harvard,” said Sarah C. Donahue, director of financial aid. “We often hear from undergraduates about the difference financial aid made in their decision to come here and in the quality of their Harvard experience over the four years.”

Approximately 60 percent of Harvard students receive need-based aid to attend, and on average their families pay only $12,000 annually.  Harvard requires no contribution from the 20 percent of Harvard families with annual incomes below $65,000, and asks an average of 10 percent of income from the majority of families receiving financial aid. Even families with incomes greater than $150,000 are eligible for aid depending on their particular circumstances, such as having multiple children in college or unusual medical or other essential expenses.

Harvard’s Faculty of Arts and Sciences (FAS) launched its portion of the University capital campaign in October. At $600 million, financial aid is the largest of the six goals for the FAS’ $2.5 billion drive.

This year 22.7 percent of the applicants requested an application-fee waiver, compared with 16.4 percent last year and 12.4 percent three years ago. This suggests even more economic diversity for the incoming class than for previous ones.

“The demographics of this year’s and last year’s applicant pools show some slight differences,” said Marlyn E. McGrath, director of admissions. “While the gender breakdown is still about 52 percent male, larger percentages of the pool are Asian-American, African-American, Latino, Native Hawaiian, and multiracial, with a smaller percentage of Native Americans.

As documented by the report “Knocking at the College Door,” produced by the Western Interstate Commission for Higher Education (WICHE) with the support of ACT and the College Board, the number of high school seniors in the United States has begun to decline after more than two decades of increases. The numbers are not expected to return to 2010-2011 levels even by 2026-27. Moreover, the report indicates that great variation will occur from region to region and state to state, with particularly large declines projected for the Northeast and the Midwest, while the South and the West will continue to see growth.

Regional differences matter because about 80 percent of American students attend college within 200 miles of their homes, 90 percent of them within 500 miles. In the Northeast, where many peer selective private and public colleges already vie for the attention of an increasingly limited number of students, there likely will be decreases in applications at most colleges in the future.

Such projections by WICHE are complex, but any college hoping to educate the future leaders of America — those who will guide the nation intellectually, politically, and in other ways — must be highly effective in recruiting the students of the new and more diverse America.

Other important factors will also affect the number of high school seniors applying to colleges like Harvard. More information on these trends is available on the Admissions Office website.

The admissions committee is now reviewing the applications of those deferred during early action, as well as those who applied for the Jan. 1 regular action program. Applicants will be notified by the committee’s decisions on March 27.

Admitted students will be invited to Cambridge for Visitas, the visiting program for prospective freshmen, to be held this year from April 26-28.  Students have until May 1 to notify Harvard of their decisions to enroll.