A monument to saved art 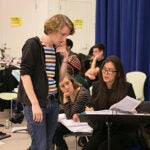 Let’s put on a show

“The Monuments Men,” a World War II action film that opens in theaters Friday, depicts an international team of middle-aged art experts in uniform racing to liberate priceless art from the Nazis.

If it sounds like an improbable Hollywood yarn, it isn’t. “The Monuments Men” is based on the true story of a team of approximately 20 unlikely soldiers — art historians, curators, museum directors — who landed in Western Europe after D-Day, charged with saving and preserving European art from brazen Nazi theft and Allied bombings. Many of the rescuers, such as George L. Stout ’29, had Harvard roots. All were united by a grand purpose.

“They all had jobs you would dream of. Many had families. Many had kids,” said Robert M. Edsel, author of the best-selling book on which the film is based, “The Monuments Men: Allied Heroes, Nazi Thieves, and the Greatest Treasure Hunt in History.”

“They thought they were a new kind of soldier, one charged with saving and not destroying. And that is very uplifting.”

Edsel spoke about the art unit and the upcoming film Tuesday evening at the Institute of Politics (IOP) program, “The Monuments Men: Rescuing Art from the Nazis,” held at the John F. Kennedy Jr. Forum.

The “Monuments Men” belonged to the U.S. Army’s Monuments, Fine Arts, and Archives section. Their ranks included Lincoln Kirstein ’30, the founder of the New York City Ballet; Paul Sachs, Class of 1900, a member of the American Commission for the Protection and Salvage of Artistic and Historic Monuments in War Areas, which recruited many of the team’s members; and Stout.

Born in 1897, Stout was a tall, dashing man with a pencil-thin moustache ­— not unlike actor George Clooney, who in the film plays the Stout-like team leader, Frank Stokes. Clooney also produced and directed the movie and co-wrote the screenplay.

Stout helped pioneer the field of art conservation while a graduate assistant at Harvard’s Fogg Art Museum. Long before World War II, he had the vision to see the risk aerial bombing and firebombing posed to art, Edsel said. Stout had spent the early ’40s pushing for a national art conservation plan.

The Allies and Stout knew that bombs were hardly the only danger to art. The Nazis engaged in “premeditated, organized looting never before seen in war,” Edsel said. The hunger their leaders displayed for European art put Western treasures at risk.

Top Nazi official Hermann Göring went on shopping trips to museums. “I like to plunder, and I intend to do it thoroughly,” he once said. Edsel said Adolf Hitler considered himself a great artist and designed a museum to be built in his hometown, laden with masterworks stolen from conquered countries.

The Nazis also would remove what they judged to be “degenerate” works by such artists as Pablo Picasso and Paul Klee, and they designated other works for destruction. As the Germans neared defeat, officers executed Hitler’s “Nero” decree to destroy cultural treasures rather than surrender them. It was into this void that the monuments officers leapt, Edsel said.

The group was deployed in Europe in July 1944. Lt. James Rorimer ’27, a Metropolitan Museum curator from Cleveland, is one hero of the saga. Actor Matt Damon, who attended Harvard, spoke to the Institute of Politics panel via Skype. In the film, he played James Granger, a character based on Rorimer.

“This is an incredibly uplifting story,” Damon said. “It’s about what role art plays in human society.”

The film’s heroine is Rose Valland, who was custodian of the Jeu de Paume. In the film, she is Claire Simone, played by Cate Blanchett. Damon’s character works to gain her confidence so she’ll tell him where the Nazis have stored art that they’ve plundered from Jews.

Two “Monuments Men” were killed in action, Edsel said. But 5 million artworks were returned by the time the units left Europe.

Another prominent art rescuer was Charles L. Kuhn, who was curator of Harvard’s Busch-Reisinger Museum. Kuhn, an authority on German art, traveled through Austria and Germany, using his expertise to uncover and retrieve valuable works. A longtime Harvard professor as well as curator, he later became chair of the Department of Fine Arts.

Edsel said the improbable story was in many ways hiding in plain sight. The looting of Iraqi museums following the U.S. invasion raised the question of why there weren’t monuments officers attached to American military units, Edsel said.

The World War II tale remains relevant and even current, Edsel said. In November, hundreds of works by Picasso, Henri Matisse, and others, seized during the war and worth at least $1 billion, were discovered in a Munich apartment.

The forum panel included Lucia Allais, the Frieda L. Miller Fellow at the Radcliffe Institute for Advanced Study, who is an architectural historian and theorist writing a book on international protection of monuments from war. The moderator was Diane McWhorter, A.M. Rosenthal Writer-in-Residence at the Shorenstein Center on Media, Politics, and Public Policy.