A lab focused on healing 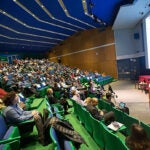 The promise of ‘big data’

Langer of MIT shares hopes for bioengineering in Radcliffe talk

In Robert Langer’s vision of the future, the paralyzed walk, the sick are healed, the maimed are whole again, and it all happens through bioengineering.

The path from lab to consumer is often long and tortuous, Langer acknowledged. The anti-angiogenesis drugs he first worked on as a fellow in the late Judah Folkman’s Children’s Hospital lab in the 1970s took 28 years to reach the market. Still, the overall message from work in advanced bioengineering and biomaterials is one of hope, he emphasized.

Langer spoke at the Radcliffe Institute for Advanced Study’s Knafel Center last Thursday. His talk, “Biomaterials for the 21st Century and How They Will Change Our Lives,” examined discoveries at different stages of development, with some closer to market than others. He talked about the development of drugs and of drug delivery systems that improve effectiveness by manipulating how long and where in the body they work. He also touched on recent advances in tissue engineering that have the potential to one day offer alternatives to people injured in accidents and war.

Langer, the David H. Koch Institute Professor at the Massachusetts Institute of Technology, holds hundreds of patents and has launched several startup companies based on his work, a strategy he said is aimed at moving discoveries to patients as quickly as possible.

Early advances in Langer’s lab involved developing time-release polymers — which some specialists said wasn’t possible — to allow drugs to be released into the body over days, weeks, or months. The technique allows physicians to even out the large medication pulses that occur after an injection or a pill is taken, to maintain a dose of drugs over time. It also protects drugs that are quickly cleared by the body, increasing their effectiveness.

Working in the early 21st century with then-fellow Omid Farokhzad, today a Harvard Medical School professor and a researcher at Brigham and Women’s Hospital, Langer figured out how to target drugs to particular tissues. Several drugs based on similar technology are in testing stages and, if approved, would allow minute doses of anticancer drugs, for example, to be delivered directly to tumors, with the intent of both reducing toxicity and increasing effectiveness. Trials so far on more than 100 patients suggest that the method is safe and effective.

Pharmacy on a chip

About 20 years ago, inspired by a show on making microchips, Langer began to think about how chips could be used to deliver medicines. The chip designed in his lab has small, sealed, drug-containing wells. The chip is implanted under the skin and can be activated by remote control so that specific doses are delivered at different times. Multiple drugs can be put on a single chip, becoming, in effect, a “pharmacy on a chip,” Langer said.

The first human trials began two years ago. The chip, which requires a small procedure to implant and which operates via a special communications band established by the government for biomedical devices, could one day help people who forget to take their daily medication or whose drug regimens require periodic injections.

Langer said his lab is developing a chip that would hold enough drugs to last for two years, and that Bill Gates hopes they’ll go further. The Microsoft founder and philanthropist has donated $6 million to see if Langer and his fellow researchers can develop a device that can deliver contraceptives over 16 years while being capable of switching off if the woman decides to try to have children.

“These are just some of the directions we hope to take in the 21st century,” he said.

Langer is also working with colleagues to understand how to manipulate cells and tissues in hopes of healing injuries. His lab has devised ways to coax tissue cells to grow into functional tissues, using 3-D scaffolds that provide initial structure to the cells before dissolving as the tissue forms. In one application, he has been working with the military to grow cartilage to provide cosmetic repairs to soldiers who have lost ears.

Another area of study is paralysis from spinal cord injury. One of his graduate students led an effort to develop an implant containing neural stem cells that restored significant function to lab rats whose spinal cords were severed. The work is going into human trials in April.

“I expect various iterations,” Langer said, “but it’s the beginning of something.”