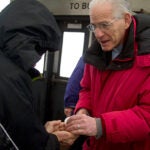 Star of stage, screen visits to receive his Man of the Year award

With his beloved sitcom slated to end next month, Neil Patrick Harris, star of the long-running CBS television show “How I Met Your Mother,” will have to console himself with his crowning Friday as Hasty Pudding Man of the Year.

Handsomely dressed in a brown suit, Patrick arrived at the Hasty Pudding Institute of 1770 to hear all about the theatrical troupe’s origins before his evening roast in Farkas Hall.

Patrick is currently in rehearsals for his Broadway turn as Hedwig in “Hedwig and the Angry Inch.”

For more on the Hasty Pudding Theatricals, visit its website.