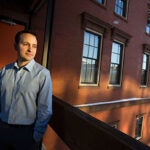 Saving tortoises by a hair

As the saying goes, you are what you eat. But new evidence suggests that the same may also be true for the microbes in your gut.

A Harvard study shows that, in as little as a day, diet can alter the population of microbes in the gut — particularly those that tolerate bile — as well as the types of genes expressed by gut bacteria.

“What we are really excited about is we and others have shown in animal models that diet can rapidly have major effects on the microbes that are in the gut,” said Peter Turnbaugh, a Bauer Fellow at the Center for Systems Biology in the Faculty of Arts and Sciences. He is senior author of the paper, which appeared in Dec. 11 edition of the journal Nature.

“But it still wasn’t clear how fast the microbes in the human gut respond to changes in diet, and to what degree those changes would be similar in different people. This study is really the first time we’ve seen that, over the course of days, a new diet can reshape the microbial community, and that those changes are consistent and reversible.”

As evidence mounts that the gut microbiome not only plays a role in digestion but may also affect overall health, Lawrence David, the paper’s first author and a former junior fellow at Harvard’s Society of Fellows who was recently appointed an assistant professor at Duke University, said the ability to manipulate those populations may offer new avenues for treating certain conditions.

“That’s part of the excitement of this work: that the gut microbiome in humans responds to changes in diet on a much shorter timescale than people thought,” David said. “That suggests it’s at least feasible to — through host action — alter the gut microbiome, so we see this as establishing the dynamic range for those changes, and the amount of latitude individuals have in potentially altering it.”

Researchers recruited 11 volunteers for the study, which began by collecting baseline data on each participant’s gut microbiome. For four days, they ate their normal diets and kept logs detailing everything they consumed.

Following the baseline period, each spent five days eating a vegetarian diet that consisted of granola, meals made with rice, onions, tomatoes, squash, garlic, peas, and lentils, with banana, mango, and papaya as snacks.

Just as on their regular diets, the participants kept daily food logs and collected samples to track how the microbes in their gut changed. After five days, they returned to their regular diets for a six-day “washout” period, to determine how quickly their microbiome would recover from any shifts caused by the food they digested.

Each then spent five days eating a diet composed of animal products, including bacon and eggs for breakfast, pork ribs and beef brisket for lunch, and salami, prosciutto, and a selection of cheeses for dinner. Snacks included string cheese, salami, and pork rinds.

Using samples collected by participants, “we saw changes in the abundance of different bacteria in as little as a day after food made it to the gut on the animal-product diet,” David said. “On both diets, we saw significant changes in the types of genes that bacteria were expressing, as well as changes to the metabolic byproducts of bacterial activity — like short-chain fatty acids — about three or four days after they switched diets.”

While the study results show that diet can affect the makeup of the gut microbiome, they also suggest that those changes may have very real implications for human health.

Though he stressed that the finding was still preliminary, David said Bilophila, a bacteria known to cause colitis in mice, was among the gut species that saw the largest population increases among people on the animal-product diet.

“We did not set out to look for this, but when we asked which bacteria had the most significant increases, it was at the top of the list,” he said. “We can’t conclude from this study whether or not Bilophila might be causing colitis in humans, but our data does show that this colitis-associated bacteria can be enriched through diet.”

The findings, David said, could point to a day when dietary changes could be used to treat certain medical conditions, rather than drugs or even surgery.

“That’s part of the promise of this field, that we might somehow be able, through an altered diet or behavior, to shape the microbiome to improve health,” he said. “People often refer to the gut microbiome as the ‘second genome’ — the first being our own — but what’s interesting is that this second genome is potentially plastic and responsive to the way we choose to live our lives.”