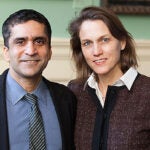 Wilson received the award as part of “Celebration! Benjamin Franklin, Founder,” an annual celebration of Franklin’s ideas and accomplishments, held in Philadelphia. Wilson received the award “in recognition of his lifetime of work in the natural sciences, and his insights into the genetic basis of social behavior of animals, including humans,” according to the group’s website.

Wilson, an expert in ant biology, is the winner of two Pulitzer Prizes, has written widely on a variety of natural science subjects, and is a leading voice for the conservation of the world’s biodiversity.

The event is sponsored by a consortium of Franklin-focused organizations and focuses each year on an area of Franklin’s interest, including this year’s subject, science. The celebration on Jan. 17, Franklin’s 308th birthday, included a seminar on “Observing the World,” a speech by Wilson, and a procession to Franklin’s grave.