The Queen, for a day 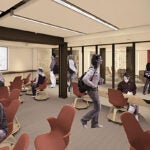 A Pudding Pot is not such an odd gift for Dame Helen Mirren. After all, Brits do love their pudding.

The acclaimed actress, who won an Oscar in 2007 for her portrayal of Elizabeth II in “The Queen” and who received damehood in 2003, breezed into Harvard Square this morning for an itinerary of Harvard-themed activities — all requisite duties as the Hasty Pudding Woman of the Year.

Dressed for the bitter chill in a down white coat with furred wrists, Mirren took in the warmth of this year’s Hasty Pudding troupe inside its new digs at 96 Winthrop St., until recently the home of Tommy Doyle’s Irish pub.

There, sophomores Bobby Fitzpatrick and Chaffee Duckers, both wielding mugs made from crocodile feet, waited to guide Mirren through the historic Hyde-Taylor House, which was built in 1635 and over the years has been home to the original House of Blues, a barbecue joint, and now the Hasty Pudding Institute of 1770.

“I just don’t want to stumble over my words,” added Duckers.

But when Mirren swept in, as friendly and charismatic as only a dame could be, their anxiety seemed to evaporate. “Hello everybody! Very excited!” she beamed, whipping off her sunglasses. Then she said to Fitzpatrick and Duckers: “Good mugs! Tea or beer?”

Fitzpatrick and Duckers outlined the Hasty’s history, from its first Woman of the Year, Gertrude Lawrence — whom Mirren dubbed “a cool woman” — to its various locations around the Square over time.

The tour concluded upstairs with a wall dedicated to earlier Women of the Year. Fitzpatrick regaled Mirren with stories of honorees past and their “festive” behavior — prank calls with Charlize Theron, and a fun-loving, post-divorce Julia Roberts.

“I’ve always been a good girl trying desperately to be a bad girl,” said Mirren. “Maybe today’s the day!”

Mirren joins the company of Marion Cotillard, 2013’s Woman of the Year, as well as Claire Danes, Julianne Moore, Anne Hathaway, Renée Zellweger, and others.

Next, on a tour of Harvard Yard led by Megan McDonnell ’14, Mirren was inquisitive about both student and faculty life and snapped several photos along the way, including a commissioned shot in front of Memorial Church with her new Hasty Pudding friends.

“I know a special opportunity when I see one!” she exclaimed. “Lovely, darling!”

In the afternoon, a crowd gathered near Harvard Square for the traditional parade, eventually ushering Mirren to her roast inside Farkas Hall.

Sporting a cow costume, J.P. Licks worker Phil Summer was busy promoting free samples of  “Hasty Pudding” — banana custard with vanilla wafers. Cambridge resident Nancy Anderson was accidentally caught in the hubbub as she went for a stroll with her dog Gracey.

But Mirren’s presence was something more for James Williamson of Cambridge. “I’ve come to the parade in years before,” he said, “but my mother was a great Helen Mirren fan so I thought this would be a great way to honor my mother.”

Mirren, flanked by men in drag and perched on a convertible lime-green Bentley followed by a yellow duck boat full of students, looked like she was having the time of her life.

“I got to talk to her,” Anderson said later, munching on a free sample of chili. “She looked beautiful!”

Mirren next received her Pudding Pot during the roast, enduring jokes about her career and good-natured prodding from Hasty Pudding Theatricals President Tony Oblen ’14 and cast Vice President Ethan Hardy ’14, including a game of charades. They challenged the actress to perform the year’s dance du jour: twerking.

“I refuse to do it! I’ll find another way around it,” she vowed before caving in, amid much fanfare. “Oh, God,” she sighed.

“It’s gorgeous,” Mirren cooed. “It is, of course, solid gold. I’ll have it melted down in no time at all!”

“I was made a dame, honored at Buckingham Palace by Prince Charles,” she said, adding, “It didn’t come anywhere close to this!”

The Man of the Year, actor Neil Patrick Harris, will receive his Pudding Pot on Feb. 7. For more information on the Hasty Pudding Theatricals and its 2014 production of “Victorian Secrets,” visit http://www.hastypudding.org/.