The music that didn’t stop 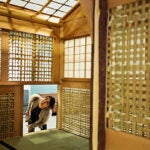 In final lecture of his series, Marsalis outlines the rise of jazz against backdrop of repression

It was a lecture delivered with cornet and clarinet, trombone and tuba, standup bass and bass drum.

Wynton Marsalis and an all-star ensemble gave a capacity crowd at Sanders Theatre a musical history of the roots of jazz in New Orleans on Thursday night, raising Memorial Hall’s ornate roof with the transitional sounds of Dixieland.

The presentation, “New Orleans: The Birth of Jazz,” concluded a series of six lecture performances at Harvard by the acclaimed managing and artistic director of Jazz at Lincoln Center. Marsalis’ lecture series, sponsored by the Office of the President and the Office of the Provost, launched in April 2011.

The rousing finale to the series brought down the house. Cornetist Marsalis and company — Lucien Barbarin on trombone, Jonathan Batiste on piano, Troy Davis on drums, Vince Giordano on tuba and bass, Victor Goines on reeds, Ricky Gordon on percussion, Marcus Printup on cornet, Don Vappie on banjo and guitar, and Michael White on clarinet — transported the hall to Bourbon Street.

“For Wynton tonight, the focus is on his native city,” said Harvard President Drew Faust in her introductory remarks. “And it’s also a kind of coming home. We can only hope that through the six marvelous evenings he has shared with us, he’s come to regard Harvard as a home away from home. We can imagine no higher honor.”

Marsalis and his band were welcomed with a standing ovation from the audience of more than 1,000, the younger members of whom held up signs that spelled out “Harvard Loves Wynton.” The band then galloped through its opening number.

Then Marsalis was off on a virtuoso ride of his own through New Orleans jazz history, his turns of phrase as evocative as the music.

“New Orleans is a city of contradictions,” he said. “It was founded by the French, who were looking for gold but ended up finding crawfish. They struggled with the swamp, mosquitoes, yellow fever, fires, everything. Eventually, they gave it away to Spain, who did the best they could with it for nearly 40 years. But they ended up giving the still-French city back to France, who very quickly pawned it off to America for next to nothing.

“What kind of way is that to treat a city that was called the ‘Paris of the South,’ the northernmost capital of the Caribbean, the meeting place of North and South America, the home of the spirit of Africa in America, and the birthplace of soul? It is the jewel no European nation wanted, and America unsuccessfully tried to tarnish.”

Marsalis described the heinous institution of slavery under the French and Spanish colonial powers and the rise of a mixed-race caste, the Creoles. He told of how the French allowed slaves to congregate on the Sabbath in an area called Congo Square, where blacks played drums and danced — “the only place in America that would allow for an open expression of Africanness.” The Spanish, he added, not only allowed slaves to play their own music but to purchase their own freedom, privileges not afforded slaves in English-speaking America.

Thus the city acquired by the United States in 1803 as part of the Louisiana Purchase had a unique culture not easily broken, he said. “The city was a French, Senegambian, Spanish, Canadian, Choctaw, Cuban, Congolese, Caribbean gumbo of sensibilities,” he said, “that had been allowed to soak in Mississippi runoff and stew in tropical heat and humidity.

“We are the most parade-y people on Earth,” he said of New Orleans residents. French Catholics had loved music for holy-day celebrations, he said. “The people in New Orleans one-upped them and started to invent holidays and reasons to dance in the park. It was a place where men sang on the docks, fiddlers fiddled, people sold vegetables singing in the streets, socialites had parlor parties featuring the latest Parisian music and fashion, and slaves played African-derived music in the open for anyone within earshot.

Ironically, the purchase of Louisiana by the one nation dedicated to democratic freedoms began an erosion of rights for blacks and Creoles that would not be reversed — save for the 12 years of Reconstruction following the Civil War — until the Civil Rights Movement of the 1960s, he said.

It was during a period of increasing repression for blacks and Creoles that African-American bandleader Charles “Buddy” Bolden, born in 1877, pioneered the musical form for which he became known as the “First Man of Jazz.”

Bolden was a hard-drinking cornetist who grew up in an age when “brass bands ruled the streets,” who “played in places of repute, and also in tough places for rough people,” his band battling others for popular supremacy in New Orleans. Of Bolden, people said: “On those old slow blues, that boy could make women jump right out of a window … He just had a moan in his cornet that went right through you, just like you were in church or something.”

Bolden, who grew up in the poorer part of the city, “created much of his musical alchemy through the sound and feeling of the blues,” the musical art form brought by dispossessed rural blacks to New Orleans, Marsalis said.

The blues, he said, are heard in Negro spirituals, in the cries of vendors selling their wares, in the “sweet Creole ditties sung to you as a child,” in the ritualistic chants of Mardi Gras, and in the call and response at church on Sundays. “The blues goes right to the core of the human condition. It attaches itself to loss and rubs that loss away by making you feel it: loss of love, loss of health, loss of innocence, loss of life, loss of trust, loss of freedom, loss of hope. More than one of those losses touches every one of us. That’s why the blues is such a powerful tool for translating across cultures. The blues knows. No matter how bad things are, the blues will set you straight.”

Jazz arose at the end of the 1800s during a time of vanishing civil liberties in New Orleans, when Jim Crow segregation was being instituted and reinforced, with mixed-race Creoles officially being designated blacks by legislative decree, and Congo Square being renamed for a Confederate general. The message, said Marsalis, was: “This is the South, not France.”

In the face of this tremendous effort to keep African-Americans in their place, jazz was an “unapologetic counterstatement,” Marsalis said. “America may have thought it would be easy to turn New Orleans into a typical 19th-century Southern town. Some mistake … That Afro-Franco culture could not just be legislated away. The desire for freedom was ingrained in all classes of this populace. The ending of slavery and the death of the promise of Reconstruction created a reaffirmation of freedom in the form of music. And that music would be called jazz.”

This “music of freedom” was concocted of “low-down refinement, voodoo-ized religion, Creole-ized Africanism, Italian passion, Spanish fire, and American insouciance, all cooked up in this muddy, wild, funky, below-sea-level bowl of stubborn swamp,” Marsalis said. “It was all sitting there waiting for a chef, and that chef came straight from the neighborhood. His name was Buddy Bolden, and he showed ’em all how to play.”