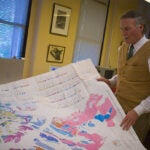 Researchers find receptors that help determine how likes, dislikes from sniffing are encoded in the brain

For most animals, the scent of rotting meat is powerfully repulsive. But for others, such as carrion-feeding vultures and insects, it’s a scent that can be just as powerfully attractive.

The question of why some animals are repelled and others attracted to a particular scent, scientists say, gets at one of the most basic and poorly understood mysteries in neuroscience: How does the brain encode likes and dislikes?

Harvard scientists say they’re closer to unraveling that question with the discovery of the first receptors in any species evolved to detect cadaverine and, two of the chemical byproducts responsible for the distinctive — and to most creatures repulsive — smell of rotting flesh. The study is described in a paper published in the Proceedings of the National Academy of Sciences.

“This is the first time we’ve identified a receptor for these chemicals,” said Associate Professor of Cell Biology Stephen Liberles, a senior author of the paper. “The larger question we’re interested in is: What does it mean that something is an aversive or attractive odor? How are likes and dislikes encoded in the brain? Understanding the receptors that respond to those cues could give us a powerful inroad to understanding that.”

Though fewer in number than other odorant receptors — mice, for example, have 15, versus more than 1,000 odorant receptors, while humans have 350 receptors and just six TAARs — Liberles said the functions of the TAARs remained largely unknown.

“We knew they were olfactory receptors, but we didn’t know what ligands might activate them,” Liberles said of the TAARs. “We know in the taste system there are different families of receptors for bitter and sweet, so we thought the TAARs might be doing something specific in olfaction.”

To understand how the TAARs function, researchers sought to identify scents that would activate them, hoping they might offer clues into why a second olfactory system evolved. In recent years, scientists working in Liberles’ lab identified odors that activated six TAARs in mice and seven in rats, nearly all of which were highly aversive.

To check TAARs in fish, Liberles’ team worked with colleagues in Germany to implant olfactory receptors in cell cultures and test them against hundreds of possible odorants, hoping to identify which ones activated the receptor.

What the researchers discovered, Liberles said, was that one particular receptor appeared to act as a sensor for diamines — a class of chemicals that include cadaverine and putrescine — nearly all of which are notoriously foul-smelling. Later tests using live zebrafish showed that when researchers marked part of a fish tank with the scent of rotting fish, the fish were highly likely to avoid the area.

“What’s also interesting is that this odor — like the predator odor we identified in mice — was aversive the very first time the animal encountered it,” Liberles said. “That suggests the aversion is innate — it’s not learned — and that it involves genetic circuits that are genetically predetermined, that exist, dormant, in the animal waiting for it to encounter the odor.

“You might like the smell of baking cookies, but it’s only because you’ve learned to associate it with their taste, or the sugar rush you get from eating them,” he continued. “But this aversion is there from birth. That suggests there is some developmental mechanism underlying these circuits. The question is, what is that?”

Though researchers have thus far only shown that the TAARs are activated by amines, Liberles said it’s unlikely that is their only role in olfaction.

Understanding how odorants like cadaverine and putrescine work in the olfactory system could also shed light on why some scents — such as rotting meat — repel some creatures, but attract others.

“Species-specific behavioral responses suggest that somehow the neural circuits are changing from species to species,” Liberles said. “For instance, tests in our lab have shown that trimethylamine is attractive to mice, but highly aversive to rats. Something similar might be happening with cadaverine.

“How does that happen? It’s not known,” he continued. “We don’t understand, as a field, how aversive and attractive odors are differentially processed … but identifying the receptor gives us a handle on the neural circuits that are involved. Now that we have the receptor, we can ask basic questions about aversion and attraction circuitry in general. From there, we can begin to understand how attractive and aversive stimuli are differentially encoded, and cadaverine is about as aversive as you can get.”