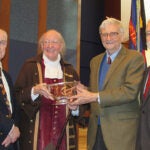 Lucy Forster-Smith majored in philosophy and theology while in college, but she also studied music and voice and dreamed of one day standing on a podium leading a large musical ensemble.

“I wanted to be a conductor, or conduct a big orchestra,” Forster-Smith said by phone recently from her office in St. Paul, Minn.

But she long ago traded her vision of a place on a musical podium for a concrete spot on the dais. She opted to become a minister and chaplain who helps guide people not in song, but in spirituality.

“I do conduct,” said Forster-Smith, but “I do it in another way.”

On Sunday, Forster-Smith was introduced to the Harvard community as the Sedgwick Chaplain to the University and senior minister to the Memorial Church.

Jonathan Walton, Plummer Professor of Christian Morals and Pusey Minister in the Memorial Church, said his own inexperience as a university chaplain inspired him to create this position “in order to recruit someone with a wealth of chaplaincy experience in a multifaith setting like Harvard. “

“In seeking advice from those with similar roles at peer institutions like Yale and Princeton, Dr. Lucy Forster-Smith’s name came up every time,” Walton added. “Lucy’s career has been all about promoting peace, justice, and religious understanding on college campuses. Harvard is fortunate to have someone of her caliber in the community.”

Forster-Smith attended Princeton Theological Seminary and has spent her career in higher education as a college and university chaplain. For the past 20 years, she has been chaplain and associate dean for religious life at Macalester College in St. Paul.

Ordained in the Presbyterian Church, Forster-Smith is a past president of the Association of College and University Religious Affairs. Her 2013 book, “College & University Chaplaincy in the 21st Century: A Multifaith Look at the Practice of Ministry on Campuses across America,” explores how college chaplains can support and mentor diverse, multifaith communities.

Forster-Smith said she found the dual nature of the Harvard job appealing.

“Being the senior pastor of Memorial Church and having the chance to really work in the context of a congregation was a huge draw for me. And then being a chaplain at a university like Harvard is just so exciting. The context, the energy of a place like Harvard is definitely a draw.”

Her approach to multifaith engagement, she said, is based on the notion of deeply honoring other people’s experiences and backgrounds and helping people “talk to each other about differences and similarities in religious traditions and to be very respectful of all of the ways that people approach the religious or spiritual dimension of their life.”

“I can think of no better place for that to happen than in a college or university setting, because you are just bumping up against people all the time who have very different perspectives than your own,” she said.

Forster-Smith said her own college chaplain inspired her to consider chaplaincy as a vocation when he told her she would do well in the role. A few years ago, she asked him what he had seen in her so many years ago.

“He actually said to me that I was a person who always had a kind of curiosity and an imagination for life, and that I was always kind of pushing out of the normative patterns into territory that might be a little more unsettling.

“I think on a college and university campus that is something that people look for. They look for people who are intellectually curious, who probe deeply into life questions and life assumptions and meaning.”

Forster-Smith said she is also looking forward to tapping into her passion for music by engaging with the Memorial Church’s vibrant program in that area.

“Being a music major in college and then having the chance to be in a context with … excellence in music is such a gift.”