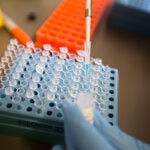 Remnants of Neanderthal DNA in modern humans are associated with genes affecting type 2 diabetes, Crohn’s disease, lupus, biliary cirrhosis, and smoking behavior. They also concentrate in genes that influence skin and hair characteristics. At the same time, Neanderthal DNA is conspicuously low in regions of the X chromosome and testes-specific genes.

The research, led by Harvard Medical School (HMS) geneticists and published Jan. 29 in Nature, suggests ways in which genetic material inherited from Neanderthals has proven both adaptive and maladaptive for modern humans. (A related paper by a separate team was published concurrently in Science.)

“Now that we can estimate the probability that a particular genetic variant arose from Neanderthals, we can begin to understand how that inherited DNA affects us,” said David Reich, professor of genetics at HMS and senior author of the paper.

In the past few years, studies by groups including Reich’s have revealed that present-day people of non-African ancestry trace an average of about 2 percent of their genomes to Neanderthals — a legacy of interbreeding between humans and Neanderthals that the team previously showed occurred between 40,000 to 80,000 years ago. (Indigenous Africans have little or no Neanderthal DNA because their ancestors did not breed with Neanderthals, who lived in Europe and Asia.)

Several teams have since been able to flag Neanderthal DNA at certain locations in the non-African human genome, but until now, there was no survey of Neanderthal ancestry across the genome and little understanding of the biological significance of that genetic heritage.

“The story of early human evolution is captivating in itself, yet it also has far-reaching implications for understanding the organization of the modern human genome,” said Irene A. Eckstrand of the National Institutes of Health’s National Institute of General Medical Sciences, which partially funded the research. “Every piece of this story that we uncover tells us more about our ancestors’ genetic contributions to modern human health and disease.”

Reich and his colleagues — including Svante Pääbo of the Max Planck Institute for Evolutionary Anthropology in Germany — analyzed genetic variants in 846 people of non-African heritage, 176 people from sub-Saharan Africa, and a 50,000-year-old Neanderthal whose high-quality genome sequence the team published in 2013.

The most powerful information the researchers used to determine whether a gene variant came from a Neanderthal was if it appeared in some non-Africans and the Neanderthal, but not in the sub-Saharan Africans.

Using this and other types of information, the team found that some areas of the modern non-African human genome were rich in Neanderthal DNA, which may have been helpful for human survival, while other areas were more like “deserts” with far less Neanderthal ancestry than average.

The barren areas were the “most exciting” finding, said first author Sriram Sankararaman of HMS and the Broad Institute of Harvard and MIT. “It suggests the introduction of some of these Neanderthal mutations was harmful to the ancestors of non-Africans and that these mutations were later removed by the action of natural selection.”

The team showed that the areas with reduced Neanderthal ancestry tend to cluster in two parts of our genomes: genes that are most active in the male germline (the testes) and genes on the X chromosome. This pattern has been linked in many animals to a phenomenon known as hybrid infertility, where the offspring of a male from one subspecies and a female from another have low or no fertility.

“This suggests that when ancient humans met and mixed with Neanderthals, the two species were at the edge of biological incompatibility,” said Reich, who is also a senior associate member of the Broad Institute and an investigator at the Howard Hughes Medical Institute. Present-day human populations, which can be separated from one another by as much as 100,000 years (such as West Africans and Europeans), are fully compatible with no evidence of increased male infertility. In contrast, ancient human and Neanderthal populations apparently faced interbreeding challenges after 500,000 years of evolutionary separation.

“It is fascinating that these types of problems could arise over that short a time scale,” Reich said.

Neanderthal ancestry is increased in genes affecting keratin filaments. This fibrous protein lends toughness to skin, hair, and nails and can be beneficial in colder environments by providing thicker insulation, said Reich. “It’s tempting to think that Neanderthals were already adapted to the non-African environment and provided this genetic benefit to humans,” he speculated.

The researchers also showed that nine previously identified human genetic variants known to be associated with specific traits likely came from Neanderthals. These variants affect diseases related to immune function and also some behaviors, such as the ability to stop smoking. The team expects that more variants will be found to have Neanderthal origins.

The team has already begun trying to improve their human genome ancestry results by analyzing multiple Neanderthals instead of one. Together with colleagues in Britain, they have developed a test that can detect most of the approximately 100,000 mutations of Neanderthal origin they discovered in people of European ancestry; they are conducting an analysis in a biobank containing genetic data from half a million Britons.

“I expect that this study will result in a better and more systematic understanding of how Neanderthal ancestry affects variation in human traits today,” said Sankararaman.

As another next step, the team is studying genome sequences from people from Papua New Guinea to build a database of genetic variants that can be compared to those of Denisovans, a third population of ancient humans that left most of its genetic traces in Oceania but little in mainland Eurasia.