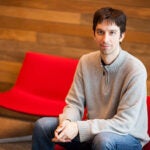 Gift is a share of $540 million divided among six academic institutions, including MIT

Ludwig Cancer Research, on behalf of its founder, Daniel K. Ludwig, has given Harvard Medical School (HMS) $90 million to spur innovative scientific inquiry and discovery. This grant reflects a portion of a $540 million gift divided equally among Ludwig Centers at six academic institutions throughout the United States. According to the Ludwig announcement, this new financial support is among the largest private gifts ever for cancer research.

Massachusetts is the only state to have two Ludwig Centers, one at Harvard and one at the Massachusetts Institute of Technology (MIT). Identical grants are also being awarded to the Ludwig Centers at Johns Hopkins, Memorial Sloan-Kettering Cancer Center, Stanford University, and the University of Chicago.

“This gift provides a momentous opportunity for the entire Harvard Medical School community to glean new insights into the basic biology of cancer, as well as to accelerate the translation of basic research to improve patient outcomes,” said Jeffrey S. Flier, dean of the faculty of medicine at Harvard University. “We recognize that Daniel and Virginia Ludwig were powerful advocates for excellence in cancer research. We at Harvard Medical School are grateful to them for their generosity and their vision, and are committed to honoring their legacy by defining the best strategic use of these new funds to advance the fight against cancer.”

This is the second major commitment Harvard has received from Ludwig Cancer Research to support a Ludwig Center that draws on the combined expertise of faculty members across the HMS Quad as well as its affiliated institutions, including those that collaborate through 18 disease- and discipline-based research programs as part of the Dana-Farber/Harvard Cancer Center. Since 2006, Ludwig Cancer Research has given approximately $60 million to the Ludwig Center at Harvard, including the endowed Ludwig professorships and an initial endowment directed specifically toward novel cancer research. These new funds will allow Harvard’s cancer research community to build upon and markedly extend research activities, attract leading biomedical and cancer researchers, speed the pace of discovery, pursue findings through subsequent stages of research, and expand collaborations throughout the United States and internationally.