Keys to a good life 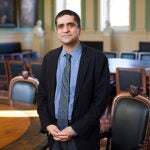 How do you lead a good life? That seemingly simple question has preoccupied and perplexed mankind for centuries.

For author and historian Jill Lepore, one key to fulfillment involves poring over old manuscripts and dusty correspondence and emerging with a compelling, enlightening story to share.

“As a reader, I find no explanation more satisfying than a historical explanation, especially if it’s completely cluttered, overwhelmingly cluttered, with evidence,” said Lepore, Harvard’s David Woods Kemper ’41 Professor of American History and a staff writer for The New Yorker, via email. “I love trying to find that kind of explanation in the archives, and then writing an essay, or giving a lecture, that offers that explanation in the form of a story.”

She wrote, speaking more broadly, that her life goals include “to do good, quietly, and to hold beauty dear.”

Lepore was one of three Harvard scholars who offered their insights into what personal fulfillment means, in advance of their participation in a discussion Tuesday in London called “The Examined Life.”

Harvard President Drew Faust welcomed alumni to Guildhall, the historic town hall in England’s capital, to share her vision for Harvard’s future and to introduce the day’s discussion. The Harvard Alumni Association and the Harvard Club of the United Kingdom sponsored the event, the first in a series titled “Your Harvard” that will take place throughout The Harvard Campaign.

In the discussions, Harvard faculty members will probe challenges facing society and innovative solutions to them. Other “Your Harvard” events will take place in Los Angeles on March 8 and in New York City on May 14.

It’s a common refrain that money can’t buy you happiness. But according to Harvard Business School’s Michael Norton, if you spend it correctly, it actually can.

For the past several years, Norton, associate professor of business administration and Marvin Bower Fellow at Harvard Business School, has explored how the ways that people spend their money can correlate to their level of happiness. His work is chronicled in last year’s book “Happy Money: The Science of Smarter Spending,” co-authored with Elizabeth Dunn, associate professor in the psychology department at the University of British Columbia.

Simply put, the pair found there were emotional dividends in paying it forward. After studying people’s spending habits across a range of countries and income levels, Norton and Dunn concluded that when a person spends money on someone else — whether by a donation to a good cause, or just taking a friend to lunch — that person is generally happier.

“When you buy things for yourself, it’s not bad for your happiness; it just isn’t good. It doesn’t do much for you. Or even if it does, it wears off really quickly,” said Norton. “But when we give to other people … it turns out it does make us happier.”

To keep that happy feeling, people should think about giving regularly, said Norton, instead of giving in a “responsive way,” such as when a colleague asks to be sponsored in a race.

Since starting his research, Norton has taken his own advice. He signed up with a charity that sends him monthly email reminders that it’s time to give to a public school project of his choice. To get that happy feeling, he said, all he has to do is turn his head. Posted on the wall of his office is a handwritten note from a young student thanking him for a recent donation that helped the class purchase science equipment.

“You really know that your money is having an impact … it’s incredible.”

Lepore’s 2012 book “The Mansion of Happiness: A History of Life and Death,” uses a historical lens to explore big, existential questions like, how does life begin? What does it mean? What happens when you’re dead? But it was actually while writing her most recent work, a portrait of Benjamin Franklin’s sister called “Book of Ages: The Life and Opinions of Jane Franklin,” that she learned “the most about the shape of life from writing history.”

“What I learned, I didn’t see until I was nearly done writing. And it’s that I wrote for my mother,” said Lepore, who penned an essay for The New Yorker titled “The Prodigal Daughter” about her mother, who died last year.

The essay is “about how the best in us is, in the end, a monument to the people we love.”

For people worried that the world’s religions seem increasingly associated with violence, corruption, and intolerance, Harvard Divinity School Dean David Hempton offered words of hope. In an email, the third speaker at the London session acknowledged that while religion, for a variety of complex reasons, can be a source of “inflaming division,” it can also be a source of solace, hope, and goodness.

“All of the world’s great religious traditions have resources within them for promoting peace, goodness, and human flourishing,” said Hempton, “for example, the almost generic emphasis on the Golden Rule for loving neighbors as ourselves.”

For Hempton, the good life involves concern for the well-being and flourishing of others, empathy, social justice, and “a disciplined (and informed) commitment to try to make the world a better place.”

“In the words of Arnold Toynbee, ‘Love is what gives life its meaning and purpose,’” wrote Hempton. “How that works out in the promotion of human flourishing is, of course, complicated and can give rise to honest disagreement over ways and means. But posing the questions and seeking answers are vital.”