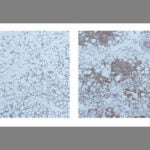 Once viewed as a flaw in the motor system, variability now appears critical to some learning, research says

Anyone who has ever stepped on a tennis court understands all too well the frustration that comes with trying to master the serve, and instead seeing ball after ball go sailing out of bounds in different directions.

Rather than cursing these double-faults, Harvard researchers say errors resulting from variability in motor function can play a critical role in learning.

Though variability is often portrayed as a flaw to be overcome, a new study conducted by Maurice Smith, the Thomas D. Cabot Associate Professor of Bioengineering, and Bence Ölveczky, the John L. Loeb Associate Professor of the Natural Sciences, suggests that variability in motor function is a key feature of the nervous system that helps lead to better ways to perform a particular action. The study is described in a Jan. 12 paper published in the journal Nature Neuroscience.

In the case of the tennis serve, Ölveczky explained, variability would prove useful by allowing a player to see the effect of subtle changes — slightly altering the toss of the ball, the swing of the racket, or the angle of the serve — that might improve performance.

“In general, we think that most tasks are best performed with high precision,” Smith said. “It’s clear that as you practice a task, and go from a novice to someone who is more accomplished, your variability goes down and your performance goes up.

The notion that variability can play a role in learning came in part from Ölveczky’s study of zebra finches.

While studying how birds learn their individual songs, Ölveczky and colleagues identified a neural circuit that allows male finches to alter the variability in their singing, depending on circumstance. Birds that are still learning their song can have high vocal variability. But if females — who value precisely repeated songs — are nearby, they can suddenly turn off that variability and produce highly stereotyped songs.

“That was a clue to us that variability is something the animal uses to improve learning, and improve his song,” Ölveczky said.

To explore that idea in humans, Ölveczky and Smith designed an experiment that involved test subjects moving a manipulandum from one point to another.

The experiment began with researchers measuring participants’ baseline variability, then asking them to trace a hidden shape, with each attempt scored on a scale between zero and 1,000. What researchers found, Ölveczky said, was that participants who had high initial variability were quicker to learn the hidden shape.

If the hidden shape was a line that curved to the left, test subjects who drew lines that varied more in the amount of this curvature learned quicker because, Ölveczky said, they were “exploring in the right dimension.” In contrast, participants with less task-relevant variability but greater variability in other aspects of performance did not learn as fast.

Another experiment using a “force-field adaptation” task, in which a robotic manipulandum could be used to “push” participants off course, showed similar results. Those with higher task-relevant variability were quicker to adapt.

The study also provides insight into how practice can improve performance.

“Not surprisingly, we found, in a final experiment, that participants who repeatedly performed the same task were able to learn it more quickly each time,” Smith said. “What was surprising is that when we measured the motor variability associated with the improved learning ability, we found that although the overall amount of motor variability did not increase, this variability was systematically reshaped to become better aligned with the task at hand. This suggests that the human nervous system regulates not only the intended performance, but the variability around it so as to optimize learning.”

If using minute, trial-and-error changes to search for more successful strategies sounds familiar, it should.

“The analogy I often use is evolution,” Ölveczky said. “In evolution, genes change, and that’s how you can learn as an organism. It’s the same with the motor system. The way the motor system learns is by changing things, not through recombination, but by changing the output, and then carefully monitoring how each of those changes results in better or worse performance.

“This may seem like a fairly counterintuitive finding because you could take the view that the more precisely you can produce a movement, the more control you have, so the better you should be able to learn,” Ölveczky said. “But that’s not necessarily true. What we’re saying is … you need to explore first to find the solution that best fits your needs for a task. Then once you find it, you can exploit it and try to reduce variability. I think this should give people some understanding and appreciation of the errors they make, and that they’re actually, fundamentally, a design feature rather than a flaw in what their brain is doing.”

Howard Wu and Yohsuke Miyamoto, graduate students in Smith’s lab in the School of Engineering and Applied Sciences (SEAS), were co-lead authors on the study. Nicolas Gonzalez Castro, a graduate student at SEAS and MIT-Harvard Health Sciences and Technology (HST), was also an author.