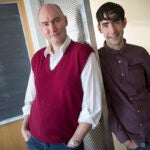 Lisa Randall, the Frank B. Baird Jr. Professor of Science in Harvard’s Department of Physics, is an expert on particle physics and in 2007 was named one of Time magazine’s most influential people. Her e-book, “Higgs Discovery: The Power of Empty Space,” which delves into the discovery of the Higgs boson, has been so successful that it was recently released in paperback. Here, Randall discusses her motivation for writing the book and why the Higgs unearthing is so significant.

GAZETTE: Why did you write this book, and for whom is it written?

RANDALL: The discovery of the Higgs boson was a remarkable event. The particle was predicted based on the need for a consistent theory to describe what was known about nature half a century ago. The Large Hadron Collider (LHC), the 27-kilometer-circumference machine near Geneva, was built to look for new particles and forces and the underlying nature of matter. One of the goals was to find the Higgs boson, a particle that helps us understand how elementary particles acquire their masses. Yet no one knew for certain when — and even if — it would be found.

When the discovery was announced on July 4, 2012, I was on vacation on the island of Patmos, Greece, where I was attending a wedding. I literally heard about the discovery on the balcony of the one café with Internet nearby on the island. I listened to a live feed (supplemented with Twitter for when the signal was too low). I was thrilled, but also frustrated to be so far from my work and my colleagues at the time. And many people immediately wrote to me to express excitement but also to ask many questions. Even though they were fascinated, they didn’t quite know what it was that had been found.

Having just written a book, “Knocking on Heaven’s Door,” which among other things explained the LHC and the search for the Higgs boson, I wanted to be able to answer those questions and complete the story (at least this part of it). But I also wanted to return to full-time research and not be burdened with another book so soon after finishing the previous one. So I decided to write a short e-book, but only if I could do it in a week.

I happened to be in London en route to a European science conference immediately after Greece and spoke to a partner of my book agent who advised against an e-book, suggesting (correctly, in my opinion) that if writers agree to the terms, they will lose out in the end. But she saw that I really was excited and read on my laptop what I had managed to write the evening before and quickly changed her mind, agreeing that it could be a good thing. My publisher, Ecco, signed on and agreed to a quick turnover (amazing in the publishing world) and added two chapters I had written on the Higgs boson for my previous two books.

GAZETTE: In the simplest, easiest, most rudimentary terms, what is the Higgs boson?

RANDALL: The Higgs boson is a particle associated with the masses of elementary particles.  Notice the careful phrasing. There are two common misconceptions about the Higgs boson that are important to know if you want to truly understand it.

First of all, the Higgs boson is associated only with elementary particle masses such as that of the electrons or particles called quarks inside protons and neutrons. Most of the mass of common matter is a result of the strong binding force in those protons and neutrons. It would exist even without the Higgs boson. But the mass of the most basic particles we know about — those building blocks of matter of which all ordinary stuff is made — can only be explained by something called the Higgs mechanism.

The Higgs mechanism is a result of something called a field that extends throughout space, even where no particles are present. This notion is probably most familiar to you from a magnetic field. You feel a force between a magnet and your refrigerator even when “nothing” is there. A field can fill “empty” space. The Higgs field extends throughout space. Elementary particles acquire their masses by interacting with this field. It is kind of like space is charged and particles get mass through their interactions with this charge.

Now, back to the Higgs boson. The Higgs boson is not directly responsible for mass. The Higgs field is. The boson is a particle that tells us our understanding of this mechanism is correct. It also is a big clue as to where that field came from in the first place. Its discovery tells us that what we expected to be true was indeed correct, and it gives us clues as to what else might underlie the Standard Model.

GAZETTE: What are the implications of its discovery? What’s next?

RANDALL: First of all, it means our understanding of what is called the Standard Model of particle physics is correct. We understand the basic building blocks of matter and the forces through which they interact. We now also know how they get their masses.

But there are still many properties we have yet to understand. Chief among the questions we’d like to answer is why masses are what they are. Not only are all the elementary particle masses different from each other, they are one ten-thousand-trillion times smaller than we would expect if we tried to estimate them based on the equations given by quantum mechanics and special relativity. It turns out this is an extraordinarily challenging problem. The answer could give us deep insights, not only into particle physics but into the nature of space itself.

The LHC will search for answers to these questions, both by looking for new particles and by better measurements of the Higgs boson’s properties. Any new information helps us move forward.

GAZETTE: Why should the layperson care about the Higgs boson?

RANDALL: No one necessarily “should.” They can live their lives without this knowledge. But I do think those who care should have access to understanding. And I also have seen that many do care. I think the reason has to do with being human and curious and wanting to understand the world and universe in which we live. I also think the discovery is rewarding in that it truly represents progress, both technical and scientific. In a world with many problems where progress isn’t always clear, it is wonderful to see science so clearly advance and for us to be able to answer such basic questions that help us better understand our universe.

GAZETTE: What are you at work on now?

RANDALL: I’m currently thinking about a couple of different questions. One major research focus is the matter that isn’t part of the Standard Model, namely dark matter. That is matter that doesn’t interact via the forces like electromagnetism under which ordinary matter interacts. We know about it because of its gravitational influence. We would like to know more about what it is.

Along with others, I’m thinking about the possibility that some part of the dark matter interacts under its own forces — dark light if you like. This could have dramatic effects on our galaxy and structure formation, all of which makes it rather rich and interesting.