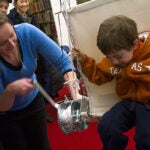 In the ‘Library Test Kitchen’

Josh Zoffer ’14 and Ben Sprung-Keyser ’15 have won the 34th edition of the World Universities Debating Championship, which took place in Chennai, India, from Dec. 28 through Jan. 3. The Harvard students battled over five days with teams from 357 universities from around the globe debating the topic of “India should adopt radical free-market policies.”

Conducted by the World Universities Debating Council, the competition, known as “Worlds,” is considered one of the most prestigious intercollegiate debating tournaments globally.

“Winning Worlds is the culmination not just of the last year of preparation, but of seven years of high school and college debate,” said Zoffer, a native of Chapel Hill, N.C.

“This was a true team effort,” said Sprung-Keyser, who is from Los Angeles. “We could not have done this without the incalculable help of our coach, Julia Fetherston, advice from former Harvard debaters such as Cormac Early and Alex Loomis, countless practice rounds with our teammates, and guidance from prominent debaters on three different continents. I’m incredibly proud to bring the championship back to Harvard and I’m honored to have done it with Josh at my side.”