Dream worth more than gold 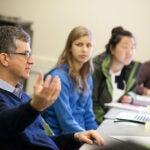 To highlight Harvard’s ties during the Winter Olympics, GoCrimson.com will provide updates on “Harvard in Sochi.”

“We like where we are right now, and everybody is itching to move forward,” said Katey Stone, coach of the U.S. Olympic women’s hockey squad, after a recent two-hour practice in Belmont. Stone, also the women’s hockey coach at Harvard, described the 20-member team as a great balance of veterans and youngsters, pointing to 31-year-old Harvard grad Julie Chu (#13) and the current Crimson trio of Michelle Picard (#23), Lyndsey Fry (#18), and Josephine Pucci (#24).

Chu, prepping for her fourth Olympics, is clearly one of the team leaders. “I absolutely loved my Harvard experience,” she said, “but now we’re focused not on where we’re coming from, but where we’re all going as a team. When we play together, we’re not from Harvard or Minnesota or any other place; we’re a team representing the United States. We all have the same goal, which is to win gold.”

Chu smiled when asked if her younger teammates look to her for guidance. “The big thing for me is playing my role to the best of my abilities, and learning how to help lead the team and be a great teammate. Our younger players are talented and have been in pressure situations before. Our biggest issue will be continuing to stay focused when the serious travel begins, when we get to Sochi, when there’s more media and fans everywhere.”

The team opens play against Finland on Feb. 8, followed by matchups against Switzerland and Canada on Feb. 10 and 12. (Full schedule here.) Canada comes into competition having won three consecutive golds.

Asked to analyze her team’s strengths, Chu said: “We have a ton of speed and our defensive core is solid and tough, an intimidating force. We’re going to use our speed, especially from the forward position, to push the pace and hopefully put a lot of pucks in the net.”

For Fry, playing in the Olympics has special significance. When they were just 17, she and Elizabeth Turgeon, a teammate in under-18 amateur competition, told each other they’d someday play together in the Olympics. Months later, on Dec. 23, 2010, Fry, then a Harvard freshman, received a heartbreaking call. Turgeon, a freshman at the University of Minnesota, had died in a car accident in New Mexico.

So Fry will bring the memory of her friend onto the ice, as well as that of an entire community — family, friends, and teammates — stepping up to offer support in the wake of the tragedy.

“Obviously I think about Liz a lot,” she said, “but it’s also about the team and everything we’re working so hard for, both with each other and for each other. I also think about everyone who has supported me, my family, my teammates in different places, all my Harvard teammates, and all my Boston people.”

The team has drawn closer during the months of rigorous preparation for Sochi, said Pucci, a defender. “I think we’ve learned so much as people and athletes and as teammates. Every day, so much is demanded of us and we’re learning how to manage everything and how to prepare and execute at Sochi.”

Striking a balance between life on and off the ice has sometimes been a challenge, she said.

“Everything we do now revolves around hockey, so we don’t need to stay up late writing a paper. But since we’re not in school, we have to find other ways to maintain balance. I’ll go to the library sometimes, do some reading, and keep the brain going just to keep my balance.”

Picard, who also plays defense, said that her Olympic experience has taught her to combine the pressures of winning with the need to enjoy the ride. “There’s obviously pressure because we want to win the gold, but it’s about going out there and doing our job, and we know exactly what that is.”