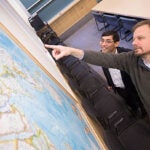 From the violence of Jupiter’s Great Red Spot to Earth’s own extreme weather, Pedram Hassanzadeh is investigating atmospheric vortices, those swirling air masses that make the weather go — and sometimes make it stop.

In September, Hassanzadeh began two years as a Ziff Environmental Fellow at the Harvard University Center for the Environment. His project is an examination of how extreme weather events work and how they will be affected by global climate change.

Specifically, Hassanzadeh is thinking about the role of dynamics and studying atmospheric blocks: clockwise-rotating, high-pressure systems that stall and back up weather behind them. The blocks can last several days or even weeks, leading to flooding or seemingly endless heat waves, such as those that proved deadly in Europe in 2003 and in Russia in 2010.

Hassanzadeh, working with Brian F. Farrell, the Robert P. Burden Professor of Meteorology, and Zhiming Kuang, the Gordon McKay Professor of Atmospheric and Environmental Science, is developing computer models of the blocks’ complex dynamics — studying the conditions behind them and tracking where the energy comes from that helps them form and sustain, and where that energy goes when they die. He plans to eventually use the models to project the systems’ behavior and frequency.

For now, however, with the project still in its early days, Hassanzadeh is using idealized atmospheric models to understand the blocks’ basic elements. Once he has developed models that can accurately reproduce current conditions, he can begin to look to the future.

The Harvard project brings Hassanzadeh back to Earth. For his doctoral work at the University of California, Berkeley, he joined Professor Philip Marcus in an effort to figure out why the solar system’s largest storm — Jupiter’s Great Red Spot — has lasted so long. The storm has been continuously observed since the 1850s and may have been seen as early as 1666.

Hassanzadeh and Marcus’ research, which grabbed headlines in November, showed that a vertical motion that scientists had previously thought insignificant is responsible for the storm’s longevity.

The vertical motion had been dismissed because the storm is relatively shallow — 40 kilometers high versus a diameter large enough to hold three Earths. But Hassanzadeh said the motion, forming a three-dimensional circulation flowing in and out of the Red Spot, allows the storm to tap into energy in the atmosphere around it. Without that factor, the storm may have wound down in a few years. With it, Hassanzadeh said, it could last between 200 and 800 years. That lifespan is extended further, he said, by the storm’s habit of absorbing smaller storms.

“There’s a lot of energy outside the Red Spot in the atmosphere of Jupiter,” he said. “[Without the vertical circulation] the Red Spot can’t use that energy.”

What the Great Red Spot and Earth’s atmospheric blocks have in common is that both are vortices. Though he’s exploring vortices in the atmosphere, Hassanzadeh is a fluid dynamicist and began his work on fluid vortices with lab experiments and by studying giant oceanic eddies.

The mathematics of all vortices — oceanic, atmospheric, Jovian, even the star-forming “zombie vortices” identified by Hassanzadeh, Marcus, and colleagues in August — are similar, Hassanzadeh said.

Since childhood Hassanzadeh has loved science. While growing up in Tehran, Iran, his mother read him books about the atom and Newton’s Third Law: for every action there is an equal and opposite reaction.

Hassanzadeh said the potential for extreme weather on a warming Earth is important to understand, but he’s also motivated by the demand to forecast extreme events and the chance to further grasp the broader atmospheric system, so complex that many questions remain despite 50 to 60 years of study.

“It’s an interesting field and I enjoy the complexity. The next step is to use more extreme numbers to model future climate conditions, that’s where the interesting stuff would be.”