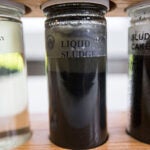 Welcome to the annual January thesis review for architecture students at Harvard’s Graduate School of Design, a day of presentations throughout Gund Hall.

Piper Auditorium saw the most action. Every inch of open space on Jan. 21 was divided into a warren of temporary presentation spaces. Between hour-long sessions, presenters and their friends swept in to hang diagrams, set up models, and wheel poster boards into place.

Each of the 28 presentations represented a final product, said GSD thesis coordinator Edward Eigen, an associate professor of architecture and landscape architecture who teaches courses on the thesis process. It’s a last chance to explain ideas and inclinations that will likely inform a student’s lifelong interests. The architecture thesis, he wrote in an essay, is an “ascent up a five-story glass mountain,” a reference to Gund Hall’s steplike open studio spaces, which insiders call the “trays.”

For the curious, the session was heaven: rooms containing new ideas and their fervent young purveyors. But for the students, many of them sleep-deprived after five months of preparation, the presentations could be one hour of concentrated hell.

“Thesis review is often a stressful time,” said Caroline James, M.Arch. 1 ’14, who defended her study of architecture and empathy. “But I was determined to enjoy the process.” About 50 onlookers watched her review, including her parents, who had traveled by train from suburban Maryland. Sitting in the front row were six critics, many of them architects and scholars from outside Harvard.

“We learn what interests them, what’s fueling them,” said critic Sarah M. Whiting, dean of the Rice University School of Architecture and a former GSD faculty member. “You’re articulating what brought you to architecture.”

That footprint of deep interests usually carries through whole careers, Whiting added. “Maybe you abandon architecture, but you’re still looking at the world through that lens.”

For James, that lens seems to be the idea that architecture is a social practice, and requires finding “a methodology of empathy” that connects the practitioner to the client.

“This thesis has been about recording and documenting and connecting with others so I can let my intuition roll,” said James, who began her work by making objects that might unlock the triggers for empathy residing in materials such as stone, wood, and clay. She took bicycle tours of area neighborhoods, finally discovering an 1892 house that struck a deep chord. She befriended the owner and created a design for a new front entrance.

In a scene repeated all day, the critics piled on praise, doubts, and questions. One charged that James’ thesis did not acknowledge precedents for empathy and architecture, beginning with the 1930s. It didn’t articulate “empathy as a technique,” said another. It was too scattered, said a third, “a bunch of little rivulets not exactly going anywhere.” But wait, said critic Mark Mulligan, an adjunct associate professor of architecture at GSD: A thesis is meant to engage intellectually, but is also about “personal expression.” To that, added Mack Scogin, James’ adviser and GSD’s Kajima Professor in Practice of Architecture, a thesis “is a chance for a student to explore possibilities. It’s not an ending.”

Scogin was also adviser for Sara Tavakoli, M.Arch. 1 ’14, whose master’s thesis — a 35-minute vampire movie — took perhaps the day’s biggest risks. It featured a mirror, a hair salon, a restaurant with red chairs, a forest in a room, a miniature cathedral and, of course, a coffin (with Caroline James starring as the resident vampire). By the end, some critics were perplexed. One confessed to wanting to go smoke a cigarette instead of watching. Another observed, “You have a long way to go [to prove the film] is an architectural work.”

Tavakoli, who filmed part of the work in her native Tehran, was unflappable. “I’m going to make this up,” she said she decided early on, “and I’m OK with that.” A critic snapped back, “Your agency as an architect and your subjectivity as a person are not the same.” Tavakoli responded later that “as an architect you have to throw yourself [into] your feelings.” Scogin stepped in. “You have to have your soul somewhere, somehow,” he said of the student film, an “exercise” in self-exploration. “It’s something we really need more of.”

To other students, the lens of interest originated in scenes from home. A big crowd watched Beijing native Tian Ren, M.Arch. 1 ’14, present “Ending Is the New Beginning,” an architectural scheme to refurbish a former Shanghai slaughterhouse, built in 1933, into a space for contemplation. The result of what he called “adaptive reuse of cultural heritage” had the air of a Buddhist temple. “Atmosphere,” said Ren, “is the most important for me in doing this work.”

Inspiration for Victor Perez-Amado, M.U.P./M.Arch. AP ’14, came from a boyhood near the Florida Everglades. The southernmost 20 percent of this subtropical wilderness is the third-largest national park, and its borders often mix uneasily with development. “It has been treated as an area to be feared,” he said of the expansive watery park. Perez-Amado’s “Proposal for New Floridian Prototypical Urban Schemes” took a tough, classical approach to the issue, beginning with the history and geology of the site and an assessment of the infrastructure along the urban-nature divide.

His solution was to create “a new porous edge” of adaptive urban infrastructure, like stacked single-family housing on platforms. It drew a mix of admiration and gentle skepticism from the critics. What will developers make of it, asked one, to say nothing of residents confronted with the idea of vertical, communitarian neighborhoods? “Everything,” he said doubtfully, “is so neat, so correct.”

One critic called the proposed city-wilderness interface “an inventive, radical idea.” To another it was “a techno-agrarian fantasy.” There was a burst of praise for Perez-Amado, as there had been earlier for the empathetic, risk-taking James. After all, he used his thesis to take chances. “This is the last moment,” a critic said, “you might be able to dream the world differently.”