A splash with the spleen 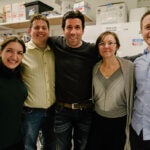 Who knew the spleen was so funny? And popular?

A parody video by a group of Harvard Medical School students went viral in December, garnering a million YouTube hits in just five days and surpassing 1.7 million since.

The video’s creators were astounded at its popularity, according to Ben Rome, a second-year student who filmed and edited the video. Rather than just basking in their 15 minutes of fame, however, the students are trying leverage the video’s popularity for a good cause: science education. They launched the HMS/HSDM Organ Challenge, a contest for primary and secondary school students to create a music video highlighting one of the body’s organs.

The challenge, launched this month, runs through March 15. Entries will be posted online and judged by members of the second-year class, Rome said. Entrants will be judged according to accuracy and originality, not production values, so students, teachers, and families don’t need to spend a lot of money to win.

“Technology today is so easy and accessible, you can make a video on your smartphone,” Rome said.

The HMS student video “What Does the Spleen Do?” is a takeoff of last year’s “The Fox (What Does the Fox Say?),” which itself was a music parody by a pair of Norwegian comedians, part of the comedy group Ylvis. The slickly produced original discusses animal sounds and the mystery of fox sounds, setting a catchy beat against simple and absurd lyrics. The video went viral, getting hundreds of millions of hits on YouTube.

The Harvard takeoff uses the same music to ask “What Does the Spleen Do?” and speculates, through similar dance numbers and equally absurd lyrics, about the possibilities: secret male uterus, backup tongue, vestigial fin.

“The Spleen” was created by a team that involved dozens of members of the second-year class in front of and behind the camera, Rome said. The spleen was selected because it’s a major organ whose functions — filtering the blood, among others — are a mystery to a lot of people.

The video was created for 107th annual second-year show, which ran for three nights in December. After the show, Rome said, the creators posted the video online. Though participants mentioned the video to family and friends over Facebook, there was no effort to garner publicity. Despite that, within five days, the video had a million hits.

Rome joined “The Spleen” project after helping out on a previous video, called “The Gunner Song,” a takeoff of 2012’s “Thrift Shop,” poking fun at overachieving students at HMS and the Harvard School of Dental Medicine. The videos, Rome said, are a lot of work, but they’re also a lot of fun and allow members of the class to interact in a different way.

“It’s such a fun project,” Rome said. “The best part is to work with so many members of the class. It was a blast.”