A break to explore 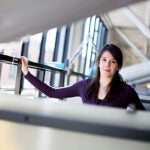 In January, grad students have had many options for sampling the new

Most folks don’t spend much time contemplating the computer mouse. It’s just another piece of technology that takes up desk space, and what little attention it gets usually comes when it breaks.

A handful of Harvard graduate students, postdocs, and staffers, however, now have a new respect for the engineering behind the lowly mouse, because they built one from scratch.

As part of the fifth annual January@GSAS, a series of more than 100 classes, seminars, and training sessions offered to students in Harvard’s Graduate School of Arts and Sciences during semester break, a workshop introduced participants to the many uses of Arduino microcontrollers, through a project in which they built and programmed working computer mice.

“It was a pleasant surprise to find workshops like this being held,” said Alp Sipahigil, a fourth-year graduate student in physics, who attended the session who attended the session at the School of Engineering and Applied Sciences. “I knew about Arduino devices, and had been looking for a chance to try them out, so this was a great chance to learn how they work in a short amount of time.”

The January offerings are designed to give students a chance to escape the lab or the library and spend time exploring subjects that might not otherwise appear in a Harvard course catalog, from the biology of superheroes to the connection between neuroscience and magic. Some programs offer opportunities for professional development and social interaction.

Along with workshops aimed at developing technological skills, the GSAS partnered with the Office of Career Services to highlight professional development programs, including sessions on making the transition to a nonacademic career and expanding professional networks using online social media tools.

For Yasmine Meroz, a postdoctoral fellow working in the lab of L. Mahadevan, the Lola England de Valpine Professor of Applied Mathematics, the workshop proved both fun and an important opportunity to learn skills she can use in the lab.

As part of a study examining plants and phototaxis, the phenomenon in which plants grow in the direction of a light source, Meroz plans to use an Arduino controller to manipulate light sources around plants.

“I’m a theoretician, so this is something I never thought I would do, ever,” she said. “This is a great opportunity because this is exactly what I need to know for the experiment. Otherwise, I would need to learn it all by myself, and it would take ages. This is perfect. I think for any experimentalist of any kind, understanding how microcontrollers work … it’s like having a computer. You can do anything with it.”

Among the other events offered to students this month was a forum at the Harvard Graduate School of Education that explored ways to develop innovative assessment techniques in the classroom.

In a session led by Gary Sherman, a research fellow at the Harvard Initiative for Learning and Teaching, participants reviewed various grading techniques — including absolute grading, grading on a curve, and pass/fail — and the advantages or disadvantages each offered.

Among the newest grading models is multi-choice assessment, an idea Sherman described as a “choose-your-own-adventure” model for students. Rather than simply taking tests or writing papers, students have the ability to pick and choose from a menu of assignments, and are awarded points for completing each. Their grade is then calculated based on the number of points they amass.

“There isn’t a one-size-fits-all answer to these questions,” Sherman said. “Our goal here is to give you the tools you can use in your toolbox.”

For Shane Campbell-Staton, who led a class titled “The Biology of Superheroes: Exploring the Limits of Form and Function,” the monthlong break was an opportunity to explore how his childhood passion for comic books and superheroes intersects with cutting-edge biology.

“As I’ve gone through academia and gained an in-depth understanding of biology, I’ve been thinking about comic books and the extreme phenotypes that exist there — things like super strength or super speed — and I realized they bring up a number of issues that scientists are thinking in depth about,” he said. “Whether or not you’re into comic books, people love superheroes, so I thought that would be a good grounding point to pull people into the scientific literature.”

For Sipahigil, the depth and breadth of activities in January are part of what makes Harvard special.

“It’s amazing,” he said. “I hope these activities continue to grow. The variety of courses is already very impressive, but it’s getting better and better each year.”