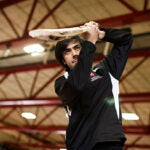 Back in the swing

Inside the stately building is a diverse array of celebrants, supporters

For more than 80 years, Harvard’s Memorial Church — its dizzying white spire rising above Tercentenary Theatre — has been an important campus landmark, and a spiritual home for the community. Created as a memorial to honor the Harvard men and women who died during Word War I, as well as a worship space to accommodate a growing student body, it has served myriad roles over time.

Built in the Georgian Revival style by architects Coolidge Shepley Bulfinch & Abbott in 1931, the church is at once a spiritual retreat; a lecture and concert hall; a space for reflection, laughter, and occasional tears; a welcoming haven for incoming freshmen; and a Commencement stage where seniors bid their farewells.

But more than a building, Memorial Church is a diverse community of students, staff, congregants, and friends. That community lost one of its cherished own when the Rev. Peter J. Gomes, who had served in the church for more than 40 years, died at age 68 in 2011. “Through his wisdom and appreciation of the richness of the human spirit, Rev. Gomes has left an indelible mark on the institution he served with unmatched devotion and creativity,” said Harvard President Drew Faust, recalling him in 2011.

In July 2012, Jonathan Walton succeeded Gomes as Pusey Minister in the Memorial Church and Plummer Professor of Christian Morals.

“Memorial Church has given me a glimpse of President Faust’s vision of ‘One Harvard,’ and I desire for it to be a major site of human connection and intellectual collaboration for this entire University,” said Walton, a Baptist minister, explaining his vision for the church.

In keeping with that theme, Walton has complemented the church’s daily morning prayers service with an informal meet-and-greet over coffee and doughnuts. He also helped to transform the church stairs facing Widener Library into a gathering space called the Porch, as part of the University’s Common Spaces initiative. “As I always say, ‘Everyone at Harvard may not belong to the Memorial Church,’” said Walton, “‘but the Memorial Church belongs to everyone at Harvard.’”

Recently, several members of the Harvard community reflected on their connection to the church and shared some of their fondest memories of it.

Edward Jones has been the church’s Gund University Organist and Choirmaster since 2003. One of his favorite rituals is the annual service of Christmas carols, a mix of old and new songs sung by the choir and congregation.

“It always gives me a tingle to do that every year,” said Jones, speaking from the church’s solemn Memorial Room, where the singers gather for the carols service before processing into the church. “The church is beautifully decorated, the Yard feels very Christmassy, and it’s a real culmination for the choir of a term of hard work, and then a really lovely way to show off and to bring a great gift to the community.”

Master’s student in Middle Eastern studies Nora Lessersohn ’09 works part-time at the church as a development and community relations coordinator, helping organize events and programs, and drafting communications for the MemChurch Fund. She said she loves the way the sound of organists practicing in the sanctuary drifts down to her basement office, and working for an organization that “makes people feel connected to one another, and to something greater than themselves.”

As a freshman, Ye Dam Lee ’15 lived just across from the church’s front door in Thayer Hall. She attended a service on her first Sunday as a Yard resident and has been a regular ever since. She serves as a co-head usher for the church, helping to organize its team of student volunteers.

Lee, who arrived on campus from “a non-faith background,” said attending weekly services has helped anchor her both to “God and to life outside of academics.”

“I’ve been able to grow so much in my faith, learning not only from the sermons, but in conversation with the staff and parishioners and my fellow ushers. More than any other place on campus, Memorial Church is where I feel at home.”