The girl who saves the prince 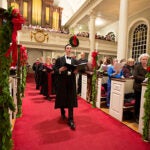 When playwright Lila Rose Kaplan was a little girl, her mother gave her the book “The Light Princess” by George MacDonald: the story of a girl who, unlike in other fairy tales, saves the prince.

Inspired and in love with the story into adulthood, Kaplan connected with composer and lyricist Mike Pettry and adapted the book into a stage production.

Originally published in 1864, “The Light Princess” tells the tale of a girl cursed to have no gravity and to forever float until she “finds her gravity by falling in love,” said Kaplan. The tale is “romantic and funny,” she said, including a “great heroine, who saves the prince at the end.” Author MacDonald was a mentor to Lewis Carroll.

Kaplan and Pettry took their ideas and the script to the American Repertory Theater’s (A.R.T.) resident director, Allegra Libonati.

“I was captivated by this idea of a protagonist who has no emotional or personal gravity, and has to find it on her own,” Libonati said, explaining she “laughed and cried” through the script. Now, over the winter holidays, others can experience “The Light Princess” too.

The prince of the A.R.T.’s “The Light Princess” is deeper than the one in the book: Kaplan and Pettry made him a musician who wants to write a love song but has a difficult time with that. “We didn’t want him just to be a prop for the princess,” explained Kaplan.

In addition to being visually alluring with “the floating princess in every single scene,” the production, which begins a two-week run on Dec. 21, is described as “unusually rich” and “filled with life lessons. … It’s an experience that will bring your family together, and you can bring people of all ages to,” Libonati said.

Before each performance, as viewers arrive, the actors will be in the lobby in character, greeting families and accessible to children, making the production an interactive event. There will be creative activities for children as well, and they will be asked to contribute their ideas about how to solve the princess’ no-gravity problem. How can she be weighed down? Some of the solutions the young people offer will be read onstage during the performance.

Pettry, Kaplan, and Libonati agree there is something in this performance for everyone. It’s “whimsical and beautiful and poetic with a sense of humor,” Libonati enthused, adding that the show has “everything you look for in a musical for families.”

The actors are all second-year graduate students at the A.R.T. Institute for advanced theater training. The two choreographers, brothers Jeff and Rick ’11 Kuperman, created the aerials and magical illusions.

Libonati was especially excited that Maria Tatar, chair of the Program in Folklore and Mythology at Harvard University, came to an early read-through of the performance. “We think of her as the fairy godmother of the show,” said Libonati, expressing her gratitude that Tatar “came and gave us her blessing.”