That thing attached to your hand? It might be doomed 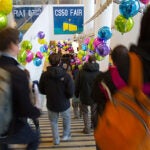 SEAS professor on prospects for the smartphone amid fierce innovation

In the fast-moving world of high tech, you’re up one day and down the next. Desktop computers were bumped aside by laptops, and tablets are now returning the favor, grabbing laptop market share.

Basic cellphones gave way to feature phones, which now fill the middle of the market, having ceded the high end to smartphones.

Since the only unchangeable thing in the tech industry is change, some observers are wondering not if smartphones will get knocked off their perch, but when, and looking toward Google Glass and a wave of smartwatches as potential successors.

Business watchers, meanwhile, are worried by the possible disruption of the business model, and an end to the dominance of Apple and Samsung as multiple other players enter the fray.

Woodward Yang, the Gordon McKay Professor of Electrical Engineering and Computer Science and a University Fellow at Harvard Business School, has had his finger on the pulse of the industry since his work developing the CMOS image sensors common in cellphone cameras; more recently, his expertise was sought in Apple’s patent infringement lawsuit against Samsung over technology created for — you guessed it — smartphones. The Gazette asked him about prospects near and far in personal tech.

GAZETTE: The smartphone seems to have comfortably reached the top of the market, but with technology disappearing as fast as it appears today, this can’t last. What do you see happening next?

YANG: The smartphone is now a burgeoning business for big players and the two big players are Apple and Samsung. They’re fighting over it, but what’s happening is that the features and functions have become more commoditized.

But what’s happened is that the technology — [though it’s] quite sophisticated —has become so commoditized, now almost anybody can just buy the parts and put together a reasonable system. So Huawei does this, HTC does this, while Google provides the key Android software. They just have to put the pieces together now. This has even happened in the automobile industry and especially with electric vehicles.

GAZETTE: Do you see a disruption in this technology coming?

The high margins that Apple and Samsung get on the smartphones are going to be eaten away by companies like HTC, Huawei, and others to be named. They’re going to introduce smartphones that are almost as good and most people are not going to be able to tell the difference.

So Apple and Samsung, and maybe Motorola-Google, are trying to innovate to make sure your smartphone stays special and doesn’t become a commodity. They’re going to do that by trying to create a web of devices — like a smartwatch, the Google Glasses, the iCloud, and Samsung can connect to your TV.

That’s what they’re trying to do, so you feel like you’re getting extra value for your phone. That’s what people are talking about. It’s a classic thing that happens to tech all the time. This is the motivation behind the relentless innovation in tech and the differentiation that it gives your products so that you can command higher margins and larger market share.

GAZETTE: Have you seen earlier disruptions, where new technology wipes out old?

YANG: I’ve seen this happen several times already. I did a lot of the fundamental work on the CMOS [complementary metal-oxide-semiconductor] image sensor, that little camera inside your phone. It actually wasn’t very good technology. CCD [charge-coupled device] was a better technology — this was about 20 years ago.

CMOS came out and for various reasons started to replace CCDs. CCD cameras were big and bulky, used a lot of power, and were expensive, which was fine when it was a video camera. CMOS cameras are smaller, use less power, are cheaper, and now it is even possible to put two or three cameras into your cellphone.

As that happened, it not only eclipsed CCDs, but it literally crushed film photography. I was on the science and technology board of Polaroid and warned them for many years in the late 1990s, “You guys are going to get your lunch eaten by CMOS image sensors.” They said, “No, we still have a good margin on Polaroid instant cameras and film and we can’t just throw away that business.”

GAZETTE: Do you see anything similar happening with the smartphone?

But that’s in the long run. In the short run, people are still going to have smartphones. The business is going to get more complicated, you’re going to see new entrants coming in with smartphones.

Whether Samsung, Apple, Motorola-Google, and Nokia-Microsoft will be able to innovate to the next stage, I don’t know. But I think you’re going to see this further evolution. The idea that a smartphone just does your phone stuff, a little Internet browsing, and email — if that’s your definition of smartphone, it’s going to change. Your smartphone is going to do more and more things.

GAZETTE: What about things like Google Glass and smartwatches?

YANG: In the short run, I don’t think they are any [danger to] smartphones. What people don’t talk about is those form factors aren’t big enough for the processor, data storage, cellular communications circuitry, and especially the battery, so you still need a smartphone. The watch still connects to your smartphone, and I believe the glasses will still need to connect to your smartphone, because you still need someplace to store the data and provide a communications link to the Internet and the rest of your stuff.

People predict the demise of things, but it doesn’t happen as immediately as people think. It takes a long time to dismantle something. But once it starts to happen, it can happen very rapidly.

Digital cameras were around a long time together with film cameras. And all of a sudden — I think it was within a span of five years — nobody bought a film camera anymore. So they’re kind of a traveling along slowly and boom, it’s gone. I think laptops and desktops were going along pretty smoothly, and all of a sudden people stopped buying desktops. And so that’s the kind of thing that happens.

Feature phones, the ones replaced by smartphones, were going along with smartphones, which had been around since 2000. They were always there, but never took off. A few years after Apple introduced their first iPhone was when smartphones just started to take off.

I don’t like to talk about “cool gadgets.” I prefer to talk about: What is the job that needs to be done? Why did smartphones take off? Because I have this necessity to be connected to my email as well as be able to talk to people. And I have necessity every now and then to look at stuff on the Internet, which is annoying, by the way, because it’s such a small screen. But sometimes, out of necessity, I have to look for my reservation code number, for example, because I have to check in at the airport.

Because of that, I choose to buy a smartphone, since it is able to do those jobs. You can think of all sorts of other jobs and once people think [a technology] is important enough and does that job well enough, people will elect to use that device. In the end, it’s people using the technology to do a job. People buy it to do a job.