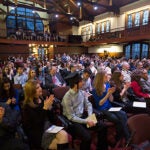 Urban wind energy. Beehives. School gardens. Rice farms. These and other suggestions were among a crush of 20 capstone projects presented this week at Harvard Extension School. All offered strategies to slow down growing environmental ills — fitting final efforts by candidates for an A.L.M. (master’s degree) in sustainability and environmental management.

“They’re very dynamic,” said George D. Buckley of the projects. In May, about 60 students will graduate from a program that has about 325 candidates poised to receive degrees within a year or two. In an average year, he said, roughly 60 percent of students do a capstone project that assesses a real-world problem. The remaining students write a traditional thesis more related to theory.

The capstone approach — often an immersive experience in the practicalities of changing the environment — is five years old, said Buckley, a 35-year instructor at the Extension School and an assistant director of the Sustainability and Environmental Management Program. As a thesis and capstone adviser, Buckley encounters a flood of final student work three times a year, in fall, spring, and summer. At those same times, capstone projects are shared in a traditional poster session at 51 Brattle St.

For more than two hours on Tuesday evening, the Grossman Conference Room was crowded with students and well-wishers. (“Behind every thesis or project,” said Buckley, “is a good friend, a spouse, or a parent.”) The program’s students are a composite of the Extension School’s usual demographic: largely older students, most with full-time jobs, and many from far away.

One candidate, Ian Hayes, is in Cambridge for the semester, but has done most of his coursework online from his home in Zurich. His project was the one on rice cultivation. Thomas Ayers, whose project was on sustainability career pathways, commuted once a week this fall from Florida. Adanna L. Woodson, whose project was sustainability performance at the Department of Defense, did the same from suburban Virginia. Gloriamar Gámez-Menéndez, who offered strategies to counter deforestation, hopes to bring her graduate school skills back to her native Mexico.

In the past five years, said Buckley, students in the program have come from all 50 states and 50 countries around the world.

Traditional diversity
The degree candidates represented more than the geographical reach of the Extension School; they represented the School’s traditional diversity of background and experience. David Havelick came to the program from his full-time job at the Harvard School of Public Health as a project manager for a prostate cancer researcher. His capstone investigation was on school-based gardens. Jay Snyder, whose project looked at systems thinking and the limits to growth, is a computer scientist in the insurance industry.

Ayers is an educator, Woodson an architect. Mary Light, whose project explores ways corporations can both create wetlands and boost their bottom lines, is a program coordinator with a management strategy company that specializes in environmental issues.

Jane Murray Wolff, a resident of Boston’s South End, is an insurance industry retiree. Her 90-page capstone project looked at how well Boston is prepared for future sea-level rise, and how concerned some of its citizens are about the possibility of catastrophic urban flooding. (The short answer: not very.) “I’m a financial person,” explained Wolff, “looking for my next lot in life.”

Among the program’s degree candidates were also a few demographic rarities: full-time students. Maria Melas left a career as a retail analyst to study sustainability. Her project was on the fate of organic materials in municipal solid waste systems. “This is a career change for me,” she said. Jamie Yu signed up for the program after a string of internships, including one at the federal Environmental Protection Agency, where she helped to map food waste generation in the Northeast. Her capstone project looked at how “zero waste” practices are achievable.

It was Yu who uncovered a universal truth in the course of her project: An institution or government may be educated about sustainability, but it won’t always take action. “They have the theory down, and the words down,” she said, “but not the practice.”

The same with the Department of Defense, said Woodson, who studied the 2009 federal executive order directing agencies to develop sustainability plans. Some got the message about energy use, waste, and carbon pollution, but others did not, she said. “The government has to work smarter.”

Some degree candidates worked and took a full-time class load. This semester, Woodson flew from Washington, D.C., to Boston once a week for classes, and took a red-eye flight back every Tuesday. (The program, one of Harvard’s online pioneers, can be completed two-thirds from home, said Buckley, but there is a part-time residency requirement too.) Hectic schedules mean students have to push hard. After her final project is in Monday, Woodson promised herself a break. “I’m going to catch up on all my old TV shows,” she said.

Intensity and surprise
Every candidate at the poster presentation agreed on the intensity of the program as an academic experience — even a few, like Light, who were already in the sustainability business.

Emily J. Reese Moody is a sustainability consultant with a Boston-area engineering group. She is already an expert in LEED, the Leadership in Energy and Environmental Design program that sets green building standards. But Moody’s capstone project on the social, health, and environmental efficacy of community gardens in her native Memphis, Tenn., uncovered a world of urban sustainability she had barely known. “I know more about Memphis now,” said Moody after completing her 247-page study, “than I ever did living there.”

She studied 40 community gardens on plots of vacant land in neighborhoods such as Hollywood, Frayser, Uptown, and Orange Mound, that are set on just a fraction of 20,000 acres of candidate garden land within the city. She found that when such gardens were created, crime went down. Moody also made case studies of Baltimore and Detroit. She found that community gardens could help irrigate “food deserts,” neighborhoods without supermarkets, as well as reduce obesity, ease racial tensions, and improve soil, air, and water conditions.

Moody’s experience illustrated another commonality among the projects, that each offered real-world lessons to families, governments, and institutions willing to listen. Ayers created his green career educational pathways, and a sample curriculum, “so someone doesn’t have to start from scratch.” Wolff’s study of preparedness for rising sea levels sketched a portrait of cities that are studying the problem, but not acting. “Everybody,” she said, “is getting ready to get ready.” These seem like relaxed civic attitudes, considering that by the end of the century Boston-area sea levels could rise more than two feet.

Snyder offered a similar caution to companies too little aware of the future’s big picture. Predictive analytics and holistic thinking about systems can help evade disaster, he said. Snyder’s case study was Eastman Kodak Co. The onetime imaging giant — now just emerging from bankruptcy — failed to anticipate a digital future that would change cameras and shrink film production, he said, so “They missed the whole moment.”

Gámez-Menéndez used her capstone project to show how a United Nations mechanism called REDD+ could reduce deforestation in Mexico, which in the 10 years before 2010 lost 7 percent of its forest cover. (REDD+ provides payments to farmers to preserve forests, and their environmental benefits.) Like the other capstone projects, hers revealed facts that surprise. For instance, 44 percent of Mexico is forested. It’s among the top 24 countries with forest biomass that locks up the Earth’s stores of carbon.

Hayes offered another surprising fact. His project was about options for improving low-yield rice paddies in impoverished areas of Southeast and South Asia. It revealed that rice cultivation of a certain type — on rain-fed lowland paddies — is the leading non-animal agricultural source of methane, a greenhouse gas. It turns out that “rice paddies burp.”

In her case study of organic waste from a chain of supermarkets in Massachusetts, Melas discovered that the state lacks the infrastructure to handle the 600,000 tons of organic waste that businesses generate each year. And yet these businesses may soon be banned from just putting such waste out with the trash. Meanwhile, Massachusetts law makes it hard to start up more facilities to process organic waste, like anaerobic digesters, she said.

The successful candidates will graduate in May. At least a few will be looking for jobs. Standing in front of her charts, graphs, and recommendations, Woodson said the program helped her be able to suggest to prospective employers: “Hire me as a consultant.”