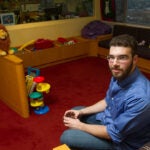 For the last two years, researchers, nonprofit representatives, and state officials have put their heads together to figure out how to maintain Massachusetts’ status as one of the nation’s most densely populated yet most heavily forested states.

Massachusetts’ forests expanded for 150 years as people abandoned farms for urban life and reached a high-water mark in the 1970s, when they covered nearly 70 percent of the state. In the face of expanding development, however, forest cover has since declined, down to 60 percent, with further declines likely.

The result of the collaboration is a report by the Harvard Forest and the Smithsonian Institution. It lays out four possible futures for the state’s forests and highlights one, called “forests as infrastructure,” that would dramatically increase both logging and land conservation, while also encouraging clustered development to minimize forest loss.

While healthy forests provide aesthetic beauty and recreational opportunities for stressed-out city dwellers, Harvard Forest Director David Foster said it’s also important to recognize the many tangible benefits people get from forests. Forests protect watersheds to ensure healthy drinking water. They act as natural sponges, absorbing water and slowing runoff during storms to prevent or reduce flooding. They provide habitat for wildlife, protecting overall biodiversity. They absorb carbon dioxide from the atmosphere and lock it up in durable wood for decades, helping to mitigate climate change. And they support economic development through forest products, such as lumber.

“I truly believe that the single best thing we can do to deal with all the [environmental] uncertainty … over the next 50 years is to keep our natural infrastructure of forests intact,” Foster said.

Maeve Vallely Bartlett, Massachusetts’ undersecretary for environmental affairs, hailed the report, “Changes to the Land: Four Scenarios for the Future of the Massachusetts Landscape,” calling it a “bold reminder of the need for continued action.” Bartlett said the report, which was unveiled Wednesday during a news conference at the Harvard Kennedy School, provides the scientific underpinning for an array of decisions facing state officials, as well as background for discussions with development interests in the years ahead.

The timing of the report is useful, Bartlett said, since the state legislature is considering an environmental bond bill that would finance environmental spending for the next five years. State action is also pending on revisions to zoning regulations and on spending for water infrastructure. As officials begin to think about how to mitigate the effects of climate change, preserving natural infrastructure to buffer climate extremes is by far the cheapest option, Bartlett said.

The four scenarios project the state of Massachusetts forests 50 years from now using various assumptions. One, called “recent trends,” is a business-as-usual scenario, continuing development trends observed from 1999 to 2005. The second, “opportunistic growth,” envisions rapid development similar to what the state saw in the late 1980s into the 1990s. The third, called “regional self-reliance,” considers what would happen should oil prices spike and state residents turn to intensive use of forests for fuel, coupled with a renewed interest in local agriculture that converts forests to farms. The last scenario, “forests as infrastructure,” seeks to increase the rate of forest conservation, coupled with increased economic use of forests to keep large tracts intact.

All of the scenarios envision a reduction from the state’s current 3.22 million forested acres, with “forests as infrastructure” seeing the least reduction, so as to maintain 2.91 million acres as forest in 2060. “Opportunistic growth,” meanwhile, would see the most forest loss, with just 2.54 million acres remaining in 2060, 370,000 fewer acres than the best-case scenario and 680,000 fewer than today.

The “forests as infrastructure” scenario envisions a future where deforestation, largely because of housing development, is at about 7,000 acres annually, the same rate as today but half of 1990 levels. Development patterns are clustered, however, to avoid forest fragmentation. Forest conservation, meanwhile, increases 30 percent from current levels, to 15,000 acres per year. The economic use of forests increases dramatically under this scenario, by 70 percent, with increased use of wood for biomass fuel and sustainable logging that gradually improves Massachusetts’ forest stands by adding high-value tree varieties such as oak, white pine, and sugar maple.

Foster said that Massachusetts can serve as a model because many areas across the country are struggling with how to deal with similar development pressures. Kathy Fallon Lambert, Harvard Forest’s science and policy project director and one of the report’s authors, said the researchers, including lead author Jonathan Thompson, a Harvard forest senior ecologist, have received National Science Foundation funding to extend their analysis to other New England states in the coming years.

“By 2060, 50 years in the future, the impacts of land-use decisions [made now] are quite profound,” Fallon Lambert said.