Science and delight, in the blink of an eye 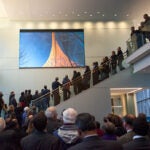 A new jewel along the river

Annual holiday lecture engages children in the magic of discovery

Bend a piece of raw spaghetti, and in the blink of an eye it will break, most often into three pieces. The scientists who explained why earned the 2006 tongue-in-cheek Ig Nobel Prize. Hundreds of children who recreated the experiment last weekend took home something else: a new topic for dinnertime conversation.

Sharing the wonder of scientific discovery with local children and their parents is a holiday tradition at the Harvard School of Engineering and Applied Sciences (SEAS), which hosted its 12th annual holiday lecture on Dec. 7.

Delivered as always by Howard Stone, a veteran of physics education and an authority on fluid dynamics, the morning and afternoon lectures dazzled families with technology, small explosions, and the simple beauty of seeing nature in a new light. Stone is a former member of the SEAS faculty and now Dixon Professor in Mechanical and Aerospace Engineering at Princeton University. In 2000, he was named a Harvard College Professor in honor of his outstanding service to undergraduate education.

“The world is really amazing, and it’s full of wonderful events, if you pay attention,” Stone told the audience. Flowers, for example, are busy all day and night, tilting and turning, opening and closing. And some movements, like the whip of a salamander’s sticky tongue, seem instantaneous. “How do you make images of any event,” Stone asked, “so that all of us can look at it?”

SEAS graduate student Sorell Massenburg led the children in interactive demonstrations to help them experience physics at work. In one, they played the role of photons passing through a camera shutter to build an image, pixel by pixel, of a crimson “H.”

In sports, a carefully placed camera can capture a perfect vault, a brilliant kick, or answer whether a galloping horse’s four hooves ever leave the ground at once. But what about other phenomena? For example, Stone asked, can music be caught on camera? A melody from a guitar and the high-pitched squeal of air escaping from the neck of a balloon might seem very different phenomena, but as the lecture crew demonstrated on video, the vibrations causing each one are the same.

“When there’s sound, there’s always movement,” Stone explained. “You just have to figure out where that movement’s coming from.”

Conversely, he added, a sound can create movement. For example, an opera singer’s voice could vibrate (and even shatter) a wine glass without touching it. “But if it breaks,” Stone told the audience, “you won’t see how. You’ll only see the end result.”

Lecture demonstration expert Daniel Rosenberg turned up an amplifier to just the right pitch and volume. The glass shattered, of course, but with surprising details that only a sophisticated camera could reveal. It showed the vessel stretching and wobbling, cracks rapidly spreading, and then fragments of glass still vibrating in the shape of a cup — as if unaware that they were no longer connected — for a long moment before they fell to the ground.

A similar thing happened when Rosenberg punctured the skin of a water balloon. The high-speed camera revealed that the latex quickly tore and peeled away, while the water remained seemingly frozen in place — like cartoon fixture Wile E. Coyote suspended in midair — before it made a splash.

“The point is that every event takes time,” Stone said.

Many of the adults, including a physics teacher in the audience, admitted their surprise at the motion of a falling Slinky. Rosenberg held one end, letting the other dangle, and then let go. The camera showed that while the top end falls, the bottom remains almost stationary in midair until the two ends meet and then drop together.

“If you take images very quickly, how many more details can we learn about the world?” Stone asked.

Four volunteers found out: Craig Sandler, MC/MPA ’00, Haoyang James Liu, vice president and branch manager at the Harvard Square Citibank, and two children, who all had their movements captured by a high-speed camera while they shook their faces vigorously. Played back in slow motion, the videos would indeed reveal new details: wide eyes, floppy jowls, and every bounce of Aster Vyrros’ fluffy pigtails.

It was “awesome,” said Vyrros, 7, who proclaimed after the lecture: “I want to be a teacher and a scientist.”

“She already is a scientist, making hypotheses all the time,” said her mother, Marina Vyrros, who fields daily questions about what creatures live in dirt and why the family dog can hear so well. “She pretty much blows me away.”

Visiting scholar Helan Wu brought her son Sicheng, 10, who was entranced by a video of a frogfish catching its prey.

For many children, the highlight of the event was the explosion of a hydrogen-filled balloon, recorded at a very high frame rate and replayed onscreen in cinematic quality.

The high-tech imaging equipment was provided for the event by Vision Research, which co-sponsored the lecture this year and supplied extra cameras for demonstrations in the hallway.

Appropriately, a thread of history — particularly the development of imaging technologies — was woven throughout the lecture. Recognizing milestones such as Eadweard Muybridge’s 1878 photos of a galloping horse and Harold Edgerton’s 1936 “Milk Drop Coronet” provided context for advances in knowledge that might be taken for granted.

“You don’t do science in a vacuum; you don’t invent things from scratch. You build upon what other people have done before and what your colleagues are doing,” said Kathryn Hollar, director of educational programs at SEAS, who co-curated the lecture. “It’s interesting to see not just the science but that politics have something to do with how things progress as well.”

The holiday lecture has a history of its own, having grown into an annual tradition for many families in Boston, Cambridge, and the suburbs.

“We try to come every year,” said Lisa Mingolla of Lexington, whose children look forward to the event. Her daughter Lindsay, 8, felt very grown up in the Science Center lecture hall — a proper college classroom. “It’s really cool,” she said.

For MIT alumnus David Frohman and 7-year-old Andre, attending for the first time, it might be the start of a new tradition. “He’s very curious,” Frohman said of his son, who was still reenacting the “pop” of the exploding balloon after the lecture. “His younger brother will be very jealous.”

The lecture is part of a range of educational outreach programs in science and engineering at Harvard that aim to engage K-12 students and members of the local community. This year’s event was sponsored by SEAS, the Center for Nanoscale Systems and the Materials Research Science and Engineering Center at Harvard (both supported by the National Science Foundation), Vision Research, Ametek, and the research and outreach programs at Princeton University, where the lecture will be repeated on Saturday.