Men on a mission 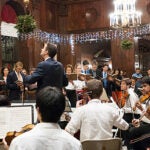 Inside the annual ‘Messiah’ sing

When leaders of the Women’s Student Association at Harvard Business School (HBS) were considering how to better address gender issues on campus, one thing they knew they would need was an effective way to deliver their message.

It didn’t take long before the women realized that some of the best potential envoys were right there in front of them: men.

Enter the Manbassadors, a program launched earlier this fall to get men on the HBS campus more closely engaged in gender equality and gender dynamics, concerns typically seen as primarily of interest to women.

“One of our goals is absolutely to give an outlet to men who are passionate and interested in getting involved,” said WSA Co-President Amanda Burlison, M.B.A. ’14.

“But another goal is to make it more approachable by providing peers for people who don’t necessarily know about the topic or feel that they can approach it.”

The idea for the program was prompted in part by “W50,” an academic, yearlong celebration of women and their achievements at HBS that culminated in a high-profile summit last April.

“I think a lot of men felt it disenfranchised them from conversations about gender, equality, or about work/life balance issues,” said WSA Co-President Alexandra Daum, ’10, M.B.A. ’14. “Basically, the emphasis was so much on women, women, women that men were feeling like, ‘What about us?’”

“We had a lot of men asking how they can be involved, but no formal structure” to include them, Burlison added.

The association, which is composed of the approximately 750 female students at HBS, has always welcomed men to its events, but historically their participation has been slight, they said.

To find suitable candidates, the association charged a female representative in each of the 20 M.B.A. class sections to scout potential manbassadors.

“We wanted to make sure we were getting men involved who were genuinely interested in the topic and well-respected on campus,” said Burlison.

Now, between 20 and 30 men form a leadership committee that helps plan and execute WSA-sponsored initiatives, such as the annual Dynamic Women in Business Conference in February; networking and social events designed to foster meaningful connections; and some recent curriculum changes to classroom discussions about the expected “cultural norms” for first-year M.B.A. students.

Most importantly, the committee spearheads outreach to other men. Within the first month, 200 men signed up to become manbassadors.

Michael Poku, M.B.A. ’14, said he joined the program because the group’s mission is a universal one.

“Gender equality ought to be important to everyone. Too often gender equality is framed or processed in a way that suggests only women ought to be attuned to the topic, but these issues impact all of us,” he said in an email. “At its core, gender equality is a human rights issue, and in order to effect positive change — from the standpoint of societal advancement and economic development — we all must do our part.”

Manuel Jimenez, M.B.A. ’15, said he has long been influenced by his mother and two sisters on issues of gender equality. More recently, his experience working in the tech sector in San Francisco reawakened his awareness of the topic’s ongoing significance and complexity.

“I often discuss these issues with my girlfriend, who worked at a male-dominated company for a while. She’s helped me understand some of the more subtle ways women may feel at an environment like that. But that doesn’t mean I always know exactly what to do or how to react to different situations,” Jimenez said in an email. “I joined Manbassadors with the hope to expand my understanding and that of others.”

Jimenez and Poku say the program has been received positively.

“Men I’ve talked to have overwhelmingly supported the program, I’m happy to report,” said Poku. “A few men who haven’t heard the term manbassador tend to look at you blankly at first, but once I convey the mission and values of the organization, I find that most men want to get on board and participate in some capacity.”

Daum said the School administration, particularly Dean Nitin Nohria, have been vocal about their desire to remove the social and institutional barriers that impede women’s development as future leaders. They have also been very receptive to the WSA’s ideas and priorities, including the Manbassador program.

“The dean himself, the first thing he said when we met with him is, ‘Can I be a manbassador?’” said Daum.

“His influence is definitely being seen throughout our interactions,” said Burlison.

“We’re pushing M.B.A. administrators; we’re asking them tough questions; we’re making big requests,” said Daum. And while not every initiative has been embraced, she said, “The decision-makers with whom we’re talking are definitely trying to find a way to make our requests work, or at least give us the next-best option.”

While gender-related topics like work/life balance and sexual harassment do come up in the classroom, Burlison and Daum said it’s a less-than-ideal forum for thoughtful and relaxed dialogue.

“It’s discussed in class, but I think that setting can often feel intimidating, particularly for men, to talk about gender issues because it’s a 90-person forum and people can tend to feel judged or as if they’re on a stage,” said Daum. “So what the Manbassadors program does is aim to create environments outside of the classroom where men can feel comfortable engaging in that conversation.”

Last September, The New York Times published a front-page story about efforts by the HBS administration to address gender disparities on campus. Daum and Burlison said reaction to the piece was largely critical, and it stirred widespread discussion among students, faculty, and administrators about entrenched attitudes, values, and practices.

“There was a lot of demand from all genders to talk about what was said in the article and how we feel about what’s actually going on,” said Burlison.

To that end, the WSA facilitated a series of intimate lunches with Senior Associate Dean Youngme Moon for groups of about a dozen male and female students to speak frankly about the culture at HBS.

One unexpected but positive consequence of the Times story, Burlison and Daum said, was that it sparked considerable interest in the program.

“The perception that HBS is a ‘hostile environment’ for women I think had the impact of making it easier for men to say, ‘No, I support women and I support gender issues and this Manbassador program, and I can get behind to prove that article wrong or at least show my resentment toward that image of HBS,’” said Burlison. “We probably had a degree of uplift and, I think, a sense of urgency.”