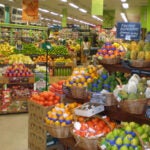 Pinpointing the higher cost of a healthy diet

Harvard scientists have devised the first method to measure the push and pull of cells as embryonic tissue develops. The cells’ tiny forces are measured in 3-D tissues and living embryos.

“Now that we can quantitate cellular forces, we can find entirely new ways to diagnose the extraordinarily wide range of diseases that alter cell contractility and tissue stiffness,” said Donald Ingber, founding director of the Wyss Institute, professor of bioengineering at SEAS, and senior author of the study. “Just as important, we can answer crucial questions about development that have lain dormant for decades.”

Biological tissues don’t just sit inside the body; they are constantly in motion, with cells tugging on and nudging other cells and the extracellular matrix — the molecular scaffold that knits cells together into tissues. As a result, tissues live in a state of dynamic tension, like a partially stretched rubber band.

Such forces are particularly important as the body develops from the fertilized egg into tissues and organs with specialized shapes and functions — a process known as morphogenesis. Biologists studying morphogenesis knew that as an embryo develops, mechanical forces direct cells to multiply, steer to their proper locations, and specialize. But they had long focused on detailing the genes and cellular pathways that direct and coordinate this process, rather than the role of cellular forces — simply because they did not have the tools to measure those forces, said Otger Campàs, an assistant professor of mechanical engineering at the University of California, Santa Barbara (UCSB). Campàs is a former postdoctoral fellow at the Wyss Institute and SEAS.

“Shaping tissues and organs involves an interplay between genetics and physics. If you can’t measure the physical side of it, you can’t completely understand the problem,” Campàs said.

Scientists had previously developed several methods to quantitate how cells push and pull on each other while growing in a dish in the lab. But they had no good way to measure these forces while the cells were building 3-D tissues in their natural environment.

Campàs decided to invent one. As a doctoral student, he had used oil droplets to measure forces exerted by a network of protein filaments that drive cell movement. Inspired by that work, he decided to try using oil microdroplets as force transducers in living tissues.

Campàs and Ingber identified a special oil called a fluorocarbon that remains separate from the cell membrane, like oil does from water, and is safe for cells and tissues. Then they devised a special coating for the droplets to make them stick to cells or to the extracellular matrix. This enabled the scientists to measure how cells push and pull within living tissues.

They also coated droplets with a chemical that made their surface glow when illuminated with a laser, then videotaped cells under a microscope in 3-D as they tugged and pressed on the droplet. The oil droplets on their own are spherical, but squeezing or stretching them deforms them like squeezing or stretching a water balloon. By measuring how deformed each droplet was, the scientists could precisely calculate the force exerted on it by the neighboring cells that adhered and by the extracellular matrix.

Using the new method, the scientists were able to quantitate the forces within lab-grown 3-D aggregates of mouse mammary tumor cells, and within living 3-D tissues from embryonic mouse jaws. They found that an individual cell exerted huge forces — 24 times as much pressure on the droplet as the jaws of an ant — and that the cells exerted the same amount of force in cultured aggregates as in tissues, lending confidence to the method’s accuracy.

In his new lab at UCSB, Campàs now uses the method to determine the spatial patterns of forces that shape different embryonic structures in fish, chicken, and other organisms.