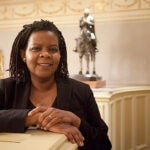 How it really happened

Five Schools compete in food drive that results in 738 meals

Tapping into their competitive spirit, students at five of Harvard’s graduate Schools challenged each other in a competition to collect canned food and other dry goods for the Greater Boston Food Bank (GBFB).

The Schools had three weeks to rally staff members, faculty, and students. They plastered colorful posters in public spaces and sent email blasts to listservs, and — pretty soon — boxes started to fill with pasta, tuna, cereal, and oatmeal. After three weeks of prodding their respective Schools to bring in canned and dry goods, the challenge resulted in 1,899 items and enough financial contributions to provide 738 meals.

“This food drive collected over 1,700 pounds of food for those in need in eastern Massachusetts, making it one of the largest community food drives so far this year.” —  Adrienne Zak, GBFB

“There’s nothing like a little competition to get Harvard students going,” said Philip Harding, president of the Harvard Graduate Council, which helped coordinate the drive. “This challenge brought together graduate students from across the Harvard community to make a difference in the Greater Boston community.”

He added, “Students are not only looking for more ways to connect across the University, they also want make a positive impact in the community while they are here. This little friendly competition helped on both accounts.”

According to Emily Jones and Ku Ka Tsai, who helped coordinate the can collection at the Kennedy School, the drive was much more than a competition: “While we are thrilled to collect the most cans for this year’s Thanksgiving food drive, the most important part was encouraging everyone to get involved. The fact that so many staff, faculty, and students were able to contribute to the goal of putting meals on the table for local families says a lot about the Harvard community’s generosity and sense of responsibility to the [local] community.”

“We greatly appreciate the efforts of the Harvard Graduate Council,” said Adrienne Zak, who received the donation on behalf of the Greater Boston Food Bank. “This food drive collected over 1,700 pounds of food for those in need in eastern Massachusetts, making it one of the largest community food drives so far this year.”

The Greater Boston Food Bank is the largest hunger-relief organization in New England. In 2012, the nonprofit collected 41 million pounds of food and fed as many as 545,000 people. The GBFB estimates that as many as 125,000 local children are at risk of going hungry each year.