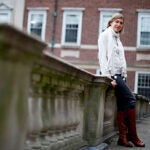 A character fit for a novel

Garber and Paulus team to connect freshmen with ‘The Tempest’

This fall Diane Paulus ’88 was back in a class stirring up a little magic.

The group gathered Tuesdays at the Mahindra Humanities Center to explore the English Renaissance, contemporary theater, and magic on the modern stage. “Both the pleasure of theatricality and its dangers have long been linked to ideas about the power of the magus, the witch, the wizard, and the arts of illusion,” read the seminar’s online syllabus.

It was the third time Garber and Paulus tied a course to a production at the A.R.T. — this spring the theater will stage a magic-infused version of Shakespeare’s “The Tempest” — but the first time they joined forces for a freshman seminar, a small, discussion-driven class that connects seasoned professors with students just beginning their academic journeys at Harvard.

“This course has a chance of reverberating through their whole careers,” said Garber, the William R. Kenan Jr. Professor of English and Visual and Environmental Studies and chair of the Committee on Dramatic Arts. “Because it’s so many different things — it’s literary analysis, it’s the directorial perspective, it’s going to productions, it’s bringing in theater professionals. …These people are on their way up within Harvard, and no matter what they go study … what we are trying with them is going to have some effect, I hope, on how they approach learning.”

“To actually have contact with an 18-year-old, how they are seeing the world, how they see plays — it’s kind of the two-way street, which I think is what teaching is all about,” said Paulus, who studied Shakespeare with Garber as an undergraduate. “You learn from the students, and then you have the opportunity to inspire them.”

When planning her “Shakespeare Exploded” festival in 2009, her first year at the helm of the A.R.T., Paulus reached out to her former professor for suggestions and advice. Garber in turn proposed they create a course together.

“It was really her idea to bring it into the curriculum,” said Paulus. “I think when we think about innovations in teaching, the idea of a collaboration across fields is key.”

The pair hope their collaborations might serve as a prototype for the University as it continues to expand both its teaching of the arts and humanities and initiatives in innovative and interdisciplinary learning.

“It’s a kind of a model for arts and humanities or even other sorts of collaborative courses for the future, for thinking about pedagogy for the 21st century,” said Garber. “Why not use the unbelievable cultural resources of this institution?”

Those resources include access to one of the nation’s top regional theaters, and its dynamic director.

As part of the course, students delivered brief presentations on the English Renaissance and 19th- and 20th-century magicians. Paulus, known for her use of song to help tell a story (the A.R.T.’s “Tempest” will include the music of singer-songwriter Tom Waits), encouraged them to dramatize their talks and consider using music as a way to “increase the atmosphere,” not unlike a magician setting the stage for a trick or illusion.

On a recent Tuesday another important classroom resource was Aaron Posner, who will direct his adaptation of “The Tempest” with Teller, the laconic half of the magician duo Penn & Teller.

The play, thought by many scholars to be the last Shakespeare completed alone, is a tale of vengeance, love, forgiveness, and illusion, and the conversation among students, instructors, and director was fittingly thoughtful and wide-ranging — part history lesson, part master class, part brainstorming session, part magic trick. One notable absence: keyboard noise. “Please note that laptops will not be permitted in class for any purpose including note- taking,” reads a line in the syllabus, keeping with the seminar’s focus on conversation.

Posner shared his working script with the students and discussed his vision for the show.

“My way in was through the balance between vengeance and forgiveness. For me the thing that touches me the most is the letting go of injury, of real injury. That has always been really, really engaging to me in this play; that move to compassion put in relation to young love.”

As for the magic, the director and Teller, who first worked together on a production of “Macbeth” in 2009, chose to avoid high-tech tricks, opting instead, Posner said, for “a human scale, rough-and-tumble magic that would be helpful on an island,” where most of the play’s action unfolds.

Garber was quick to remind the group that interpretations of Shakespeare’s works have always been the norm.

“One could change the language, one could change the plot time, period, and/or costume in which the play is being performed. Cross casting, gender switches, all of these things were done from the beginning of Shakespearean performance.

“This kind of adaptation is always exciting, always very contemporary,” she added in reference to the magic-inspired approach. “It has a long history and it is not a violation of the plays. In a very different way, it’s an homage to them and also a realization of something that is latent within them.”

One of the greatest tricks of all, noted Paulus, is a seamless production. It’s no sleight of hand, said the longtime director, but the result of hard work and continual tweaking.

“What you are seeing is a working, living, breathing document that will change and morph,” Paulus said, referencing the copy of Posner’s script that students had read as part of an assignment. “The process doesn’t stop,” she added. “The script is a road map, a blueprint of directions for the experiment; but the experiment now has to be enacted with people, lights, and an audience to see if it’s working.”

Rachel Harner, who loves Shakespeare, acting, and magic, said she was thrilled to take a seminar that combined all three. And the chance to work with Paulus? “Amazing.”

“As a freshman, I have been doing a lot of theatrical performances throughout campus, and every time I bring the seminar up, people are amazed I have the opportunity. … Being at Harvard there are so many opportunities to meet people in the field you are interested in working in, so I am trying to take as many as I can.”

But the seminar’s appeal reached well beyond those interested in careers in the arts.

Deng-Tung Wang plans to concentrate in biomedical or environmental engineering. A fan of theater through high school — particularly the technical aspects — Wang was hooked by the seminar’s promise of exploring connections among magic, illusion, and the stage.

“I was just very intrigued. I thought it was something different.”

Aside from the course material, the chance to closely connect in and out of class with peers with varying backgrounds and perspectives left a lasting impression, he said.

“It’s the bond, the friendships that we created.”