Back in the swing 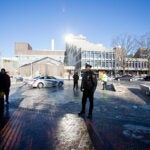 Ibrahim Khan ’14 charged down the track like a long jumper approaching take-off, gave a hop, and swung his arm in an overhand arc to release a small white ball. Then, taking up a flat-sided wooden bat, he fended off the ball thrown toward him on a bounce with the deftness of a hockey goalie.

The captain of the Harvard Cricket Club was demonstrating bowling and batting techniques in a corner of the Gordon Indoor Track on a recent Monday. Weather had forced the tutorial inside, from Jordan Field, the cricketers’ home turf. “We usually play in white — but clothes, not snow,” the club’s faculty adviser, Professor Stephen Blyth, said with a smile.

The quintessential game of the British Commonwealth is experiencing a renaissance at Harvard, where it was first played in 1868.

The Harvard Cricket Club, composed largely of international or U.S.-born students of Indian, Pakistani, or West Indian descent, was revived in 2011 after two years of dormancy, and has made impressive strides since.

Games are no longer played on a basketball court using tennis balls wrapped in electrical tape. In fact, this fall the club of 18 finished second in the Ivy League tournament after besting regular-season competition from Dartmouth, Boston University, Northeastern, Bryant, and the University of Pennsylvania. Now, Harvard cricketers have hopes of a Final Four finish at a national tournament in Fort Lauderdale, Fla., set for spring break.

The sport can be complicated for the novice. “It’s well-known that trying to explain the rules of cricket to an American is impossible,” said Blyth with a wink, setting out to do just that for a reporter.

But it gets into the blood. Blyth, the managing director and head of public markets at Harvard Management Co. and a professor of the practice in statistics, grew up playing in London, and competed for Christ’s College, Cambridge, and Imperial College London. “I still fancy myself as a player,” said the 46-year-old, who took the field as a substitute for Harvard in the regular season and hit a game-winning shot against Northeastern.

Ancestor to baseball, cricket is a bat-and-ball game played on a 360-degree field by teams of 11. The batsman hits the ball and runs between wickets to score runs, while the bowler, through a confounding variety of deliveries, tries to knock down the wickets protected by the batsman to secure an out. There is no foul territory; any batted ball is in play. Games at the highest level can go on for days: the recent Ashes tournament between England and Australia consisted of five five-day games. Harvard plays an abbreviated form, with games lasting about three hours.

Khan — who has been playing since he was 2 years old in Lahore, Pakistan, and who led the Harvard club this past season in total runs and total wickets taken — joined Blyth in detailing the nuances of the game, describing how a bowler “swings” the ball, the cricket equivalent of a curve in baseball, and the ways a spin-bowler throws in or out to a batter. A bowler, Khan continued, might throw a “googly,” which is “an off-break that looks like a leg-break,” or a “doosra,” which is the opposite, “a leg-break that looks like an off-break.”

Blyth, meanwhile, demonstrated different batting swings: off the front foot and back foot; the hook; the cut; on- and off-drives; and forward and backward defensive blocks.

Cricket’s appeal rests in the “layers of subtlety” in its array of bowling deliveries and batting strokes and shots, as well as the social aspects of games that can stretch over days, Blyth said.

For devotees from regions where it is a passion — Britain, the Caribbean, South Asia, Africa, and Australia and New Zealand — the language of the sport is a lingua franca. So when Khan, who is concentrating in applied mathematics and economics, attended a student-faculty dinner with his statistics professor, conversation naturally turned to cricket. Blyth agreed to help out with the club, and he has pitched in not only as adviser and game-time substitute, but as a benefactor: His support will enable the team to fly — rather than drive 26 hours nonstop — to Florida.

In this, the Hot Stove season for baseball, hope also springs eternal for Harvard cricketers. “Our team’s a lot more balanced now, with eight or nine really good players,” said Khan. “Our bowling has got a lot better, and our fielding is something we’ve been working on.”

The club hopes to practice indoors under a heated bubble at the Soldiers Field complex this winter, with the goal of a Final Four showing at the Fort Lauderdale tournament. Compared with a chilly fall of fielding with bare hands balls moving 100 m.p.h. — the club played at night, when the varsity field-hockey program was not using Jordan Field — the setting itself will be a sort of comfort.

“I dream of the day when Harvard has a cricket pitch,” Khan said.