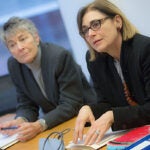 A new report proposes doubling research and development spending, a heightened priority on family planning, and increased taxes on harmful substances such as tobacco, alcohol, and even sugar as part of an effort to eliminate health disparities between rich and poor nations.

The report, chaired by Harvard economist and Charles W. Eliot University Professor Lawrence Summers and published today in The Lancet, says that a dramatic reduction in health disparities across the globe is not only possible for the first time in history, it would be cost-effective.

The report says its recommendations could bring nations with poor health care to the level of the best-performing middle-income countries within a generation. The resulting changes would save 10 million lives in the program’s target year of 2035 alone, the report’s authors said. Further, the economic benefit generated from longer, healthier lives would amount to between nine and 20 times the cost of the program.

“This is a once-in-human-history opportunity,” Summers said. “It used to be that life expectancies were quite similar around the world, and very short. Then there’s been very substantial divergence in different parts of the world, in mortality rates and life expectancy. Now we have an opportunity for a reconvergence at very favorable levels.”

The commission that developed the report was co-chaired by Dean Jamison of the University of Washington and included 25 leading global health experts and economists, including Summers, Dean Julio Frenk of the Harvard School of Public Health, and Sue J. Goldie, the Roger Irving Lee Professor of Public Health and faculty director of the Harvard Global Health Institute. Several other Harvard faculty members were involved in the broader efforts around the report, authoring working papers and participating in workshops and meetings that sought input from experts and stakeholders from around the world.

“The basic message … is that good investments in health, are good in themselves, but they also promote economic growth,” Frenk said. “The main idea is that by 2035 we can achieve what’s called a grand convergence, namely closing the most egregious equity gaps we still have between poor and rich populations around the world.”

The authors say the plan outlined in the report, called “Global Health 2035: A World Converging within a Generation,” is ambitious but feasible. It has an annual price tag of $70 billion — between 1 and 3 percent of the estimated developing nations’ economic growth that would result — and targets infectious diseases, such as AIDS, tuberculosis, malaria, as well as ailments common in developing countries referred to as “neglected tropical diseases.”

The growing, interconnected global economy and the success of international development programs mean that much of the cost could be borne by the nations whose populations are getting the benefits, the report’s authors said. International aid still will be important, Summers said, but should be increasingly shifted toward providing “global public goods,” such as new drugs and vaccines.

The report recommends a dramatic increase in research and development into such drugs, vaccines, and health technologies, doubling spending by 2020 to $6 billion. About half of that increase, the report’s authors said, could come from middle-income countries themselves.

The report also proposes tax increases as a way to raise revenue and curb the burden of noncommunicable diseases, also called “lifestyle” diseases, resulting from the spread of the low-exercise, high-fast-food, Western lifestyle around the world. The taxes would be levied on tobacco and other harmful substances, such as alcohol and sugar. A 50 percent tax on tobacco, for example, could prevent 20 million deaths in China alone over the next 50 years, and generate $20 billion, the report said.

The report, discussed today in London during an all-day symposium at the Royal College of Physicians, was a year in the making and marked the 20th anniversary of the World Development Report on Health, which was chaired by Summers. The current report’s timing reflects both that anniversary and the search for a new global health agenda with the looming deadline of the United Nation’s Millennium Development Goals in 2015.

The biggest challenges to adopting the report’s recommendations would be finding needed resources and nations “pulling back from multilateralism,” Summers said. Budgets are tight everywhere, he said, which is why the report’s economic arguments are important.

Though some technological hurdles remain, Summers said, the major roadblocks to improving global health are political and practical. National governments have to support pursuing needed reforms, he said. And, once adopted, delivering those reforms in places with poorly functioning health systems will be another major challenge.

“As we’ve been reminded in the United States over the last six weeks, it’s not all about policy design, it’s also about policy execution,” Summers said. “It is a great opportunity, but nothing good happens automatically.”