A new community, a new era 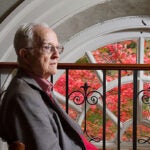 As Harvard President Drew Faust rose before a host of elected officials, community leaders, Allston residents, and Harvard affiliates to discuss “the very important role that Barry’s Corner will play between Harvard University and the city of Boston,” she took a moment to extend heartfelt gratitude for a “powerful and persistent voice of support” for the city: Boston Mayor Tom Menino.

Menino, Faust said, “dedicated his career and much of his life to making the lives of others better… I just want to say what a complete privilege, pleasure, and joy it has been for me to work with you, and how much I admire you, and what you represent, about public life and service.”

Speaking earlier at the Friday afternoon groundbreaking, the mayor of 20 years standing, whose unprecedented fifth term nears an end, said that the Barry’s Corner Retail and Residential Commons project in Allston was the result of “a first-class team and a first-class community, working together.”

When he served as city councilor in the late 1980s, Menino said, he “sometimes fought with Harvard… but under Drew Faust’s leadership, Harvard doesn’t just pay attention to the community, it gets involved with the community. And that’s what it’s all about, working together to solve our problems.”

Leaders across Boston joined community members to celebrate the groundbreaking, a major step in creating a vibrant destination in North Allston. Located at the corner of Western Avenue and North Harvard Street, the development will include 325 rental apartment units, 35,000 square feet of ground-floor retail space, two new streets, 220 new parking spaces, three public open spaces within the project, and a new park entrance to Smith Field.

Many residents who filled the room participated in the many months of community meetings leading to the ceremony. The $150 million development reflects the comprehensive input received during a nearly 18-month process, identifying the best uses, size, and scope for the project. The process was managed by Harvard’s real estate partner for the project, Samuels & Associates, which was selected through an unprecedented process that included participation by the Harvard Allston Task Force.

“As a company, we are focused on creating active spaces that meet community needs and build upon neighborhood strengths,” said Joel Sklar, president of Samuels & Associates. “This project serves multiple purposes: creating a link between the neighborhood and the University, enlivening the ground floor with neighborhood-friendly retail, adding open space and gathering places, and incorporating enough residential density to support these goals.”

The Barry’s Corner project, designed by architectural firm Elkus Manfredi and to be built by Suffolk Construction, will create hundreds of construction jobs and 250 permanent part and full-time jobs, which will be transit accessible.

As she closed her remarks, Faust reflected that her favorite moment with Menino came in May, when he received an honorary degree at Harvard’s Commencement. After receiving “a standing ovation like none other I can recall for an honorand,” Faust said, she crossed campus with Menino on one side and fellow honorand Oprah Winfrey on the other, and yet people rushed up to shake Menino’s hand.

“He was the one whose hand they reached out to take, and I think it was because so many of them knew how directly he had affected their lives,” she said. “He’s made such a difference in the possibilities before them, and the nature of the lives they live in this city and this region, every day.”