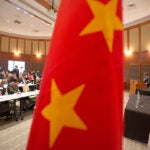 Everyone feels down in the dumps occasionally, or anxious and nervous about the challenges, real or perceived, that loom in front of them.

If the blues give way to deep, unending depression, or if occasional anxiety leads to breath-robbing panic, psychiatrists and psychologists are ready to help. But what if the blues, while not black, have turned gray? And what if your fears don’t send you into a debilitating, full-blown panic, but churn your thoughts constantly, making you avoid social occasions or impairing your performance at work?

In the past, there hadn’t been a lot of help for those neither well nor sick enough for medical intervention, a large area referred to by Harvard faculty members Shelley Carson as “almost depressed” and Luana Marques as “almost anxious.”

The two books, both released this month, are part of the “almost effect” series of books from Harvard Health Publications aimed at people who have previously fallen through the cracks in a care system that tends to look at health as binary: You’re either sick or well. Instead, the series acknowledges that there is a continuum between being entirely well and clinically ill and that early help can not only alleviate current suffering but also head off more serious illness down the road.

The books are designed to educate readers and guide them through self-analysis, helping them determine where they are on the “almost” spectrum and whether the time for self-help has already passed. The books combine case studies and self-help features such as questionnaires and worksheets with the latest medical knowledge to provide a comprehensive, reader-friendly introduction to issues.

“It’s exactly what’s missing in the literature,” said Marques, a psychologist at the Harvard-affiliated Massachusetts General Hospital and assistant professor of psychology in the Harvard Medical School Department of Psychiatry.

Carson, an instructor at Harvard Extension School and an associate of the Faculty of Arts and Sciences’ Psychology Department, said the occasional blues are normal, as is feeling down when struck by a negative event like a financial setback, a failing grade, or a break-up with a significant other. When those feelings stick around, however, you may cross into “almost depressed.”

Depression is a global problem, Carson said, and one that stalks college campuses. Depressed students tend to withdraw from outside activities and head back to the dorm after class to play video games and watch TV instead of engaging in activities or interacting with friends.

Depression has many potential causes, Carson said, some of which are genetic. High stress, poor diet, and lack of sleep can contribute to the complex condition.

Experts have seen depression rise in the population every decade since the 1940s and have found that most of those with mild symptoms — 75 percent — will eventually develop full-blown depression, Carson said. Treatment of depression can be life-saving, as those who are depressed have four times the risk of heart disease and up to 15 times the risk of suicide as members of the general public.

“Stress is a huge factor,” Carson said. “It’s a go, go, go world with no time for reflection or yourself.”

Among remedies detailed in the book for those who are “almost depressed” are increased exercise, engaging in creative activities, reducing stress, goal-setting and meaningful activity, increasing social activity, improving sleep and diet, and using a meditation technique called mindfulness.

“What we want to do is arm people with techniques and strategies to prevent this from occurring,” Carson said.

Depression and anxiety are related, Marques said. While depressed people are not able to get going, anxious people have trouble slowing down. As with depression, there are normal levels of anxiety, Marques said. A certain amount of anxiety can be beneficial. Worry about an upcoming exam may goad a student to study hard and ace it, while pregame jitters may help an athlete to focus and do her best.

Governing anxiety levels has gotten more difficult as life’s pace has accelerated with each decade, Marques said. Technology, which can be a blessing, also forces people to multitask and keeps them from disengaging. The result can be increasing levels of anxiety, constant worry, restlessness, poor sleep patterns, and even fear. In extreme cases, it can lead to a diagnosis of generalized anxiety disorder, panic disorder, or a more specific phobia.

Solutions for reducing anxiety include increasing exercise, improving sleep, tapping into social networks, utilizing mindfulness techniques, and learning to tolerate some anxiety in life without slipping out of control.

“Anxiety is normal and adaptive at an optimal level,” Marques said. “Everybody has anxiety. The question is how much and how often.”