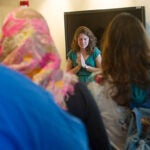 HDS gives thanks for its harvest

Not long after the Harvard Management Company reported an 11.3 percent return for fiscal 2013, and Harvard launched a $6.5 billion capital campaign, the University’s annual financial report strikes a somber note and points to challenging times in the near future. Vice President and Chief Financial Officer Dan Shore talks about the “complicated choices” facing the University.

GAZETTE: The Harvard Management Company reported strong endowment results in September, but this report from the University strikes a very different tone. Can you explain the difference between the two reports for people who might feel as though they are somehow out of sync?

And when you look at the endowment returns in the context of the real pressure on our traditional revenue streams, you can see that we are in a difficult operating context. Strong endowment returns are crucial, but returns can be volatile, and just because we’re Harvard doesn’t mean that we’re entitled to a certain level of investment returns every year. We still need to think about the University’s finances in different ways, and about choices that we can make, because the pressures that we see in the long term are strong ones.

GAZETTE: For the second year, the University is reporting a deficit. Is that a cause for concern?

SHORE: As a percentage of our budget, it’s quite small. Harvard has a $4.2 billion budget, and so a deficit of $34 million, which is what we’re reporting this year — I don’t want to diminish the fact that it is, in fact, a deficit, but it’s manageable. However, the path toward our ability to thrive in the future requires that we not wait until the deficit gets even bigger before we start to act, because then it will require us to be in a much more reactive position.

Of course, the challenge of a deficit in an academic enterprise is that the nature of universities is quite fixed-cost. Half of our budget is compensation, whether it’s salaries and wages or the benefits that we pay to faculty and staff. And almost another quarter of the budget is embedded in space, whether it’s what it costs to operate space, the interest that we pay on debt that we’ve used to finance our space, and the depreciation of our facilities over time. Those costs are very hard to change in the near term. So when you see a deficit and you feel the revenue pressure, and you understand how fixed your cost structure is, it’s something that you want to pay attention to sooner rather than later.

GAZETTE: Tell me more about those pressures. How has the financial outlook of the University changed since the downturn in the global markets in 2008?

SHORE: That was a very significant time for all of higher education. It created challenges for us, but at the same time it gave us an important opportunity to revisit the ways in which we manage our finances.

Coming out of the financial crisis, we’ve reimagined the ways in which we manage our liquidity, manage our cash, how we think about debt as a part of our capital structure. But equally as important today, we need to think about how we manage our budgets for the long term.

In the aftermath of the financial crisis, we benefited from the large federal stimulus program, which provided our labs with important incremental funding during what otherwise would have been a much more challenging time. That incremental funding has now run out, and now we’re seeing the prospects of budget reductions for our federally funded research.

Just like the immediate aftermath of the financial crisis gave us an opportunity to reimagine a lot of aspects of managing our finances, the looming challenges that lie ahead require us to rethink how we manage our budgets.

GAZETTE: What are those “looming challenges”?

SHORE: They involve the pressures on our traditional revenue streams. Federal funding accounts for about 16 percent of the University’s budget, so it’s a significant piece of our revenues. The biggest part of our revenue, more than a third, comes from the endowment distribution, and while we had a good year of investment returns, it’s not safe to assume that, from here forward, we will have extraordinary investment returns.

We were the beneficiary of an amazing period of growth in the United States economy and the global economy in recent decades. Clearly, in the past few years that growth has been much more sluggish, and it likely will continue to be sluggish. I don’t think you can plan with the expectations that the global markets will continue to generate the kind of returns that we received last year.

So those are two very big pieces of our budget, and holding down tuition revenue goes hand in hand with our commitment to financial aid. When you put the three of those together, you’re up to substantially more than half of the University’s total revenue. We need to think about whether there are more creative ways to think about alternative revenues, and at the same time, whether there are different choices that we can make about how to manage our expenses so that we can not only survive, but thrive through what could be a challenging number of years coming up.

GAZETTE: What are some of the other ways that Harvard could generate revenue?

SHORE: The promise of online learning is certainly one, and while our initial efforts have featured mostly free courses, it’s difficult to imagine a sustainable financial model for providing online learning that doesn’t have a revenue stream associated with it.

Technology transfer is a place where Harvard has a lot of opportunities. We will want to think about different ways to work with industry, and work with third parties. You can see some of the fruits of those activities already beginning to emerge, with things like the Wyss Institute.

Those are opportunities that are completely consistent with our mission, because Harvard aspires, among other things, to have impact in the world. And different ways of commercializing some of the amazing things that we do at Harvard can allow us to have a greater impact.

GAZETTE: We’ve also launched a $6.5 billion campaign. How does that factor into your financial forecast?

SHORE: The campaign is another critically important area where we can provide ourselves with more resources and more revenue. Again, Harvard’s endowment is impressive in all respects, but it is something that needs to last forever. There’s a high degree of restrictiveness to it. And because of all the other pressures on the University, new contributions to the endowment can really help us support and launch new efforts in areas where we feel there are important opportunities for Harvard to lead.

Specific things that we’re hoping the campaign will help us with are critically important priorities for the University, such as renewing our undergraduate Houses, further developing our campus in Allston, and having a stronger School of Engineering and Applied Sciences.

I think those kinds of initiatives really do require us to bring in new resources in order to have a sustainable model going forward.

GAZETTE: In your letter in the financial report, you refer to “complicated choices” that need to be made. Does the campaign take some of the pressure off for people who have to make those choices?

SHORE: The campaign helps, but, fundamentally, we can no longer live in a world where things continue simply to be additive. The next new and exciting thing that we think it’s important to do can’t simply be layered on top of all of the other things that we’ve been doing. It’s just not a sustainable model. And I think the entire higher education industry is feeling the need to move away from that way of doing business.

That’s very difficult in an academic institution, where you’re not working toward a bottom-line financial result, you’re working to have impact, and there’s such a breadth of amazing ideas, amazing activities here. There are things that we can do to avoid having to make some very painful choices about some of our academic initiatives, but they involve things like benefits, which people feel very strongly about — for good reasons, given the cost trends that we’ve seen in things like health expenses.

In the end, though, those are the kinds of difficult choices that we have to make, and we need to engage the community so that everyone understands and can lend their perspectives to those choices.

SHORE: Look at our amazing faculty and students: Their success is enabled by their ability to try new things — in order to achieve breakthroughs, you will try new things. You will experience failures along the way, but you’ll learn from them, and by learning from them you can figure out how to be successful. I think we need to have more of that ethic, and more of that culture as administrators at Harvard.

There can be a tendency at Harvard just to expect success, and to make sure that, before we do anything, we will succeed in it. And if we aren’t highly confident we will be successful, then we shouldn’t undertake it in the first place. That can put you into a much more cautious posture, where you will become quite risk-averse. You might not even think about different ways of doing business, different ways of organizing ourselves, and then that won’t allow us to attempt to reshape ourselves in a way that might allow us to not only be sustainable in the long term, but to potentially reallocate resources from things where we have redundancies to things that might be a lot more aligned with the mission and what we’re trying to achieve.

GAZETTE: Where do you hope that an administrative culture shift like that will lead us?

SHORE: We will be able to make ourselves more efficient and effective than we are today. When we think about things that we have been undertaking over the past several years, whether they’ve been reorganizing our library operations, reorganizing ourselves and reorienting ourselves around IT and how we engage in IT activities, this is what we’re learning in those endeavors: that we can become more efficient, and we can provide similar if not better service levels.

When President Faust talks about One Harvard, there’s a version of that vision that relates to research and academic collaboration, and there’s another that relates to the day-to-day operational activities of the University. When we work in concert, we can do some very successful things together. And to the extent that we are able to achieve efficiencies in some of these shared activities, those savings can be reinvested in the teaching and research that we feel so passionately about here.