Tuning into the whistleblower 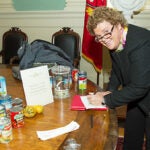 Serving, thanks, and giving

Addressing his model jury, Stephen C. Reyes, LL.M. ’14, a commander in the Navy JAG Corps, made the argument for jurors to condemn Edward Snowden, calling his actions “unadulterated, unbridled arrogance.”

Who was Snowden, the former CIA employee and former National Security Agency contractor who disclosed up to 200,000 classified documents to the press, to “decide which intelligence operations were legitimate, which intelligence operations should protect us, and which were illegitimate?” argued Reyes. “[Is] he the individual who should decide what information should be kept secret, and which information should be released to our enemies?”

The rapt audience listened carefully to Reyes’ remarks. The 60 Allston, Brighton, Cambridge, and other area residents in attendance were tasked with determining whether the former infrastructure analyst with Booz Allen Hamilton, who is now a fugitive in Russia, should be condemned or acquitted.

More than 230 years ago, Goldstein said, “members of this very community made a grave and difficult decision that would shape our very existence. Convinced they wanted a better life, a life free from an invasive and intrusive government, they defied British law and sought independence … we do not believe our founding fathers worthy of moral condemnation simply because they defied British law, because they believed we deserved a better way of life or a better government.”

Charles Nesson, Harvard Law School (HLS) professor and founder and director of the Berkman Center for Internet and Society, brought Reyes and Goldstein to the Harvard Allston Education Portal to facilitate a discussion on the themes of whistleblowing, secrecy, and justice. Unlike other juries, however, Nesson instructed these jurors to focus on whether Snowden’s actions were immoral, rather than illegal.

The illegality of Snowden’s actions, Nesson said, was undeniable. But, he argued, “a deep question as to how we feel about what he has done” remained, and it was this question that the juries faced.

With summations closed, the audience broke into eight small groups moderated by fellows from the Berkman Center and delved into the task of determining Snowden’s moral stance — with a condemnation, acquittal, or no consensus being the options.

In introducing Nesson, Robert A. Lue, faculty director of the Harvard Allston Education Portal and HarvardX, and professor of molecular and cellular biology, said that the Nov. 20 discussion was one more way of bringing diverse communities together, allowing Harvard faculty members to share their work and research directly with members of the neighboring Allston community.

“Tonight’s event represents a novel experiment in small-group interaction, a sharing of ideas among Harvard faculty and community members,” Lue said. “Throughout his time at Harvard, Charles has pushed us, and the institution of Harvard, to go beyond our limits — to really think more creatively about the social and technological changes happening all around us. Tonight is a facilitation of a communal event, and it shows what the future holds for new Ed Portal programs, and might serve as a compelling model for other communities around the world.”

After 20 minutes of discussion, the eight juries returned with a split decision: four voted to acquit Snowden, while four could not come to a unanimous decision, resulting in four hung juries.

Echo Liu, a Brighton resident and member of the Ed Portal, said the event inspired a dynamic and thought-provoking debate.

“I didn’t expect it to be so interactive,” she said, “but we all got to participate. The discussion really enriched my point of view. It was interesting to hear the other side of the argument. I’m looking forward to [the next faculty program].”

In closing, Nesson invited attendees to return for a future mock-jury program to be hosted by the Ed Portal and the Berkman Center to consider another question: Should Boston submit its name for the 2024 Summer Olympics?

The next presentation in the Ed Portal Faculty Series, “The Hemingses: Writing the Life of an Enslaved Family,” takes place on Monday, when Professor Annette Gordon-Reed will speak about Thomas Jefferson and the Hemingses.