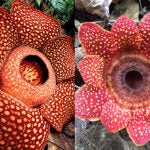 The house-size boulder looked like a good landing site, at least viewed from the maps and satellite images Tim Laman and Conrad Hoskin found online.

It was large and stood out in the boulder field that made up much of the terrain in the mountainous part of northern Australia for which they were bound. It was close to the rainforest they hoped to explore, a mountaintop remnant of what they believed must have been a much larger forest covering the region in wetter times.

Earlier expeditions to the mountains’ base had uncovered new species, but the rough terrain had discouraged exploration of the mountains themselves. Laman, an associate of Harvard’s Museum of Comparative Zoology, and Hoskin, a fellow at Australia’s James Cook University, suspected there might be more species new to science up top.

So last March, they loaded their gear into a light bush chopper and made the two-hour flight to Queensland’s Cape Melville. Things were going smoothly until they spotted the boulder: It was just where it was supposed to be, but there was no way the chopper could set down on it.

“It [was] a lot less flat than it looked on Google Earth,” Laman said.

Despite the difficult beginning (the search was far from over, as a second possibility was plenty flat but too high), Laman and Hoskin’s three-day expedition proved a smashing success. The pair found two new lizards — a golden-colored skink and a camouflaged gecko with a tail shaped like a leaf — as well as a new frog species adapted to life among the boulders: It breeds during the rainy season and relies on moist pockets among the rocks to raise its young.

Laman, who received a doctorate in biology from Harvard in 1994, is an associate in ornithology at the MCZ who developed a passion for wildlife photography while working on his dissertation. Today, he is an award-winning wildlife photographer whose work has appeared in National Geographic. Hoskin is a herpetologist.

Laman’s first encounter with the region came during a National Geographic-sponsored quest to document every species of the dramatically colored birds of paradise, the subject of a 2012 book. Though most bird of paradise species are on the nearby island of New Guinea, there are two in Queensland, across the narrow Torres Strait. Laman received a National Geographic grant to explore the area and contacted Hoskin, who suggested the Cape Melville range.

Soon after landing, the team started catching skinks, which Hoskin realized were a new species. The frogs took more work. The amphibians hid near the base of the boulders during the heat of the day and came out at night. After waiting until dark, Hoskin and Laman caught four or five in the glare of their headlamps.

On the way back to camp one night they saw eyes along the tree trunks reflecting lamplight. On closer inspection, they found the leaf-tailed geckos, related to but distinct from similar leaf-tailed geckos in mountains hundreds of miles to the north and south.

From a photographer’s standpoint, the geckos made ideal subjects, Laman said. They seemed to firmly believe that their camouflage made them invisible to threats and stayed still enough for Laman to photograph them.

The animals — and the forest itself — are likely remnants from a much larger rainforest. As the area dried out, the rainforest shrank until it was limited to the small mountains on Cape Melville. Today, the region is deluged during the rainy season but dries out from July to November. Though just 500 meters high and several kilometers long, the mountain range is close enough to the coast to trap moisture rising off the ocean during the dry months and sustain the rainforest.

The discoveries were surprising, Hoskin said, not least because Australia has been thoroughly explored. Cape Melville National Park, where the mountains are located, remains so rugged, however, that the “park” designation might be misleading to the casual tourist: Its website cautions visitors that they’re on their own.

In the months since the trip, Hoskin has described and named the species and sent the DNA to be analyzed. In October, academic papers on the new species were published, along with fanfare of the discovery of a “lost world.”

Laman said there’s much more exploration waiting there; Hoskin is already planning a return in January.