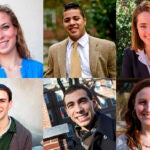 In an age when even the pope tweets, it is only natural that Harvard Divinity School (HDS) has created its first online, interactive learning experience, with help from HarvardX, the University-wide initiative to support faculty use of innovative technologies for teaching.

The HarvardX course module, “Early Christianity: The Letters of Paul,” HDS1554.1x, taught by Laura Nasrallah, explores the context of the Pauline correspondence in the Roman Empire and the impact of these powerful texts today.

“What was the impact of real-life slavery on Paul’s language of being a ‘slave of God’? How might changing a city’s calendar to begin with the savior’s birthday — that is, the Roman emperor’s — have affected religious life in the ancient world? This online course module aims to give students a context for answering these questions,” said Nasrallah, professor of New Testament and early Christianity at HDS. “It also invites students to participate in the continuing conversation about these letters, which are important in ongoing political and philosophical debates, and of course important to Christians as foundational scripture.”

The offering will incorporate new and custom-built technologies, such as an interactive timeline and map, and will take advantage of collections from Harvard and Princeton, as well as using photographs taken by Nasrallah and Harvard students at archaeological sites in Greece and Turkey. In addition, Nasrallah and her course team are partnering with the website Rap Genius to create an online environment where annotation and discussions of Paul’s letters can occur.

“I really want a conversation to happen. My hope is that the online forum will allow students to do what the communities that first received Paul’s letters did: to engage in a democratic space of debate about the meanings these important letters generate,” said Nasrallah.

The letters of Paul existed well before modern conceptions of Christianity, even before the term “Christian” was coined. An aim of the Divinity School’s foray into online learning is to help students understand how the texts were received by the earliest readers, how they emerged in the context of the Roman Empire, and how they became part of Christian scripture.

From female prophets at Corinth to the idea that Paul considered himself a Jewish prophet of a new messiah, the course module will explore topics that have an impact on modern debates about such issues as gender and religious leadership and interfaith dialogue.

The video lectures not only occur on Harvard’s campus, but take students on a journey to the Mediterranean of the Apostle Paul’s lifetime, with footage and images from sites such as Ephesus and Corinth.

“Harvard Divinity School combines preeminent scholarship and an interfaith learning environment that, until now, has flourished predominantly within the classroom,” said David N. Hempton, dean of HDS and Alonzo L. McDonald Family Professor of Evangelical Theological Studies. “This exciting new course is a significant step in furthering our use of innovative pedagogical tools to advance more widely the critical study of religion.”

Nasrallah, a 2013-14 Henry Luce III Fellow in Theology who is working on a book titled “Archaeology and the Letters of Paul,” has in the past held conferences and edited volumes that brought together archaeologists, historians, and scholars of religion in interdisciplinary conversations that otherwise rarely happen.

Students can register and take the course via edX, the not-for-profit online learning enterprise founded by Harvard University and the Massachusetts Institute of Technology , starting on Jan. 6.