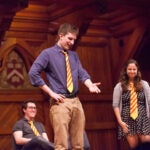 Harvard curios that are fleeting and ephemeral and free

After nearly four centuries, Harvard has attics full of curios and treasures. Among them are the whimsical, the earnest, and the odd: Emily Dickinson’s writing desk, Houdini’s handcuffs, a T.S. Eliot bowler, and drawers of fish, bone, and botany specimens that date back to the 18th century.

Then there are those Harvard curios that are fleeting and ephemeral and free: principally the fallen leaves that every autumn tourists and passers-by tuck into pockets and bags as mementos of a place, Harvard Yard, that shimmers with meaning and history. This pastime proves again that — despite a veneer of civilization — humankind holds in its core a sense of magic in the leaves, sticks, shells, and stones of the outside world: that such totems will give us power, will make memory linger, and will link us to gods of nature long forgotten.

Last week, a tourist paused to pick up a large leaf of gold and green that had fallen from a Harvard Yard sugar maple tree. She had other choices for the taking too: leaves of honey locust, American sweetgum, red maple, Ohio Buckeye, pin oak, and of American elm — the tree that a century ago had complete sway over species in the Yard. Harvard poet Jorie Graham once wrote that — yes — fallen leaves possess a “jubilation of manyness.”

The visitor’s maple leaf had fallen near Hollis Hall, where in the 19th century two of America’s chief celebrants of nature lived as Harvard undergraduates. Ralph Waldo Emerson roomed in Hollis for three years. (“Who leaves the pine tree,” he once wrote, “leaves his friend.”) Henry David Thoreau lived in Hollis all four years. It was in Room No. 8 that he planned his first camping trip to the shores of Walden Pond. The very name of that place, decades later, sends resonant thrills along the nerves all humans now share — that nature is both richness and refuge. “I have a room all to myself,” wrote Thoreau in his journal. “It is nature.”