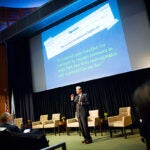 Online, on site, in the field

The Rafflesiaceae family of plants has many identities — producer of the largest flowers in the world, for one, with some specimens measuring a meter or more in diameter. They’re also known as “corpse flowers” because they give off an overwhelming odor of rotting flesh to attract pollinating insects. In their native Southeast Asia, they’re sometimes called the “jewel of Borneo” and are celebrated as a cultural touchstone and beacon for the conservation of the tropical rain forest.

For scientists like Charles Davis, a professor of organismic and evolutionary biology, however, the plants have — until now — largely been known for their mysterious nature.

The plants were described some 200 years ago, but botanists had been unable to answer many basic questions about them, particularly how those huge flowers develop. Using a combination of traditional methods and modern genetic testing to compare two closely related members of the family, Rafflesia and Sapria, a team of Harvard researchers — Davis, Lachezar Nikolov, a recent Ph.D. student in Davis’ lab, and Elena Kramer, the Bussey Professor of Organismic and Evolutionary Biology — is helping to provide key insights. The research, in collaboration with colleagues from Switzerland, Malaysia, and Thailand, is described in a paper published online Oct. 28 in the Proceedings of the National Academy of Sciences.

“What I think is most striking is that these two plants, which look nearly identical, are built in fundamentally different ways,” Davis said. “Rafflesia have been described for almost 200 years, by some of the best morphologists, but the basic understanding of their floral organs was not known until now.”

Outwardly, Davis said, Sapria and Rafflesia produce nearly identical chamber-shaped blossoms. They are characterized by similar structures — each includes a number of outer “lobes” resembling petals on flowers, with a center dominated by a domelike structure, called a diaphragm, that encloses a central disk containing the plant’s reproductive structures. One of the few outward contrasts between Rafflesia and Sapria, Davis said, is the number of lobes — Sapria has 10 or more, Rafflesia just five.

A closer look, however, revealed vast differences in structures that appear very similar.

Careful inspection using traditional microscopy and cutting-edge genetic methods performed first in Sapria showed that it is constructed like many flowers. The lobes on its outer ring are the plant’s sepals — the outermost part that forms a flower — while the inner lobes are petals. Perhaps most importantly, Davis said, tests showed that the diaphragm is a separate structure.

In Rafflesia, meanwhile, researchers found something distinctly different that provided a breakthrough.  “Like Sapria, we think the single outer lobes are sepals,” Davis said. “When we look at Rafflesia in the early stages of development, however, the petals are very different. We find that they have become fused to form the diaphragm. No one had ever looked carefully at this early stage of Rafflesia development to connect these outer lobes to sepals, and the inner lobes to the bizarre diaphragm structure.”

Researchers also uncovered a novel ringlike organ, distinct from the petals and sepals, that circled the inside of both plants. This type of organ is what gives daffodils their trumpets, and passionflowers their crowns. In Rafflesia, Davis said, the structure was prominent early in the plant’s development, but never developed beyond that point. By contrast, the structure was found to be critical in Sapria, where it expands dramatically to form the inner walls of the flower’s chamber and its domelike diaphragm.

The results were so surprising, Davis said, that he initially didn’t believe them.

“It was hard to imagine,” he said. “These plants look very similar, yet they’re built in fundamentally different ways.”

While the study sheds new light on how these plants develop, Davis said it may also help to explain how Rafflesia in particular attained such huge flowers. “Among a very large flowered group of plants, Rafflesia’s have the biggest flowers of them all!” Davis says.

“Based on what we know about the development of other, related plants, we believe Sapria represents the more ancestral pattern of construction,” Davis said. “If you look at the evolution of Rafflesia, which contains the biggest flowers within the family, we see a major burst in floral size, so it may be that this re-architecture is what allowed these plants to become even larger.”