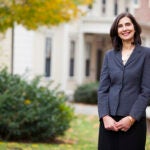 Their interests range from exploring the nexus of medicine, psychology, and sexuality to applying statistics to immunology research, but one thing Elizabeth Byrne, Alexander Diaz, Aurora Griffin, Andrew Lea, Paolo Singer, and Katherine Warren have in common is a desire to change the world for the better.

As newly minted Rhodes Scholars, they’ll soon have the chance.

The five seniors and one recent graduate were among the 32 Americans named as Rhodes Scholars on Sunday. The scholarship, arguably the most prestigious academic award in the world, covers the full cost of two or three years’ study at the University of Oxford. With this year’s winners — the most in the nation — Harvard has now produced a total of 348 Rhodes Scholars.

Elizabeth Byrne
As an intern in the lab of Associate Professor of Organismic and Evolutionary Biology Pardis Sabeti, Byrne got her first up-close look at the battle against diseases such as HIV, as well as the powerful ways statistical analysis can unlock biological data.

At Harvard, Byrne continued the research she’d begun in Sabeti’s lab at the Ragon Institute, working with Bruce Walker, a professor in the Department of Immunology and Infectious Diseases at Harvard Medical School, and Assistant Professor of Medicine Douglas Kwon.

“My time at Harvard — especially my work at the Ragon Institute with Dr. Bruce Walker and Dr. Douglas Kwon, at [the] Boston Healthcare for the Homeless Program with Dr. James O’Connell, and my research with Dr. Pardis Sabeti — has made a tremendous impact on me,” Byrne said. “I am so grateful for these individuals and organizations, along with my education at Harvard, for inspiring me as I have explored and refined my academic interests and aspirations.”

Byrne’s time at Harvard wasn’t confined to the lab.

In addition to exploring biological ways to fight disease, she has also sought to understand and ease personal suffering through her work at homeless shelters in Harvard Square and Boston.

“While I knew that analyzing large data sets at labs could yield groundbreaking biological solutions, I was also drawn to personal and qualitative issues associated with HIV that could not be distilled into the columns and rows of an Excel file,” she said.

At Oxford, Byrne hopes to study applied statistics to gain a stronger foundation for applying analytical tools to biological data.

“With this background, I hope I can take research all the way from the complex stories of individuals, to a large data set, to illumination of basic biology, to clinical interventions. My dream is to help those individuals from whom the initial data was taken, and give people … with AIDS a new chance for survival.”

Alexander Diaz
For Diaz, a Lowell House resident and psychology concentrator, receiving a Rhodes scholarship, as the son of two immigrants, “is a manifestation that, at some level, the American Dream is still alive and well.”

“To be honest, it really has not sunk in yet how big this is,” he said. “To have my name alongside role models that I looked up to and still look up to today, such as Bill Clinton and Cory Booker from my home state of New Jersey, is incredible.”

In addition to a range of community service, Diaz is working with U.S. Attorney Carmen Ortiz to incorporate his work on subconscious biases, and how to counteract them, in the courtroom. At Oxford, he hopes to use that research to develop social policies for mitigating such biases.

“This scholarship is a lifelong investment in me to fight the world’s fight. My plan at Oxford is to learn how to create and implement creative social policies that are informed by my and others’ psychological research on subconscious biases … in law and the courtroom. My fight is a fight for fair equality of opportunity, for communities of color, for gender, ethnic, sexual, and other minorities everywhere, that they get fair treatment before the law.”

Aurora Griffin
Though she considered pursuing a career in medicine, Griffin consistently found herself intrigued by the questions posed by another discipline — bioethics.

Rather than study biology or medicine, she chose to start her academic pursuit of those questions in an ancient place.

“Bioethical debates are naturally interdisciplinary, requiring knowledge from a range of subjects, but they affect the lives of individual people,” she said. “To develop a broad intellectual foundation for such a field, I chose to study the classics and explore the beginnings of Western ethical thought, hoping that the ancients would give me tools with which to evaluate today’s moral issues.”

In addition to her work in the classroom, Griffin also founded two organizations — Harvard Daughters of Isabella and Harvard Christian Medical Outreach — that emphasize the value of human life through hospital ministry, the first at the Cambridge Rehabilitation and Nursing Center, the second at Dana-Farber Cancer Institute.

Her plan for Oxford is to pursue a degree in theology and Christian ethics and to work with researchers from other disciplines to explore how wide groups can find consensus around challenging ethical issues.

“I hope to work with others with different perspectives toward creating a society that is more conscious about the way it cares for the elderly, whether that is through teaching the next generation of scholars or writing the policy or even running for public office.”

Andrew Lea
History and science have always been inextricably linked in Lea’s mind.

He grew up in Hanford, Wash., home to the facility that produced the plutonium used in “Fat Man” — the atomic bomb dropped on Nagasaki.

A conversation with the son of a Manhattan Project engineer led to questions about the role of ethics in such research, Lea said. “I left … simultaneously disturbed and intrigued, determined to find a way of engaging with science not as a menagerie of facts but as a human activity.”

When he enrolled in classes that approached science from a historical perspective, he found the angle he’d been looking for.

At Harvard, Lea used that approach to study questions at the historical nexus of medicine, psychology, and sexuality. His senior thesis looked at the boundary between media and medicine as a place where conceptions about sex, gender, and identity are formed and negotiated.

He plans to continue that work at Oxford by studying the history of science, medicine, and technology, particularly in relation to sex-reassignment surgery.

“As a historian of science, I hope to produce engaged scholarship — to channel the discipline’s social relevance and to strengthen the inescapable link between historical inquiry and social justice. I am still processing what all of this will mean for me, but one thing has been clear from the beginning: to be placed in the company of such passionate and accomplished individuals is deeply humbling and inspiring.”

Paolo Singer
An interest in development and economic growth — and the inequality that often accompany them — began early in Singer’s life. While commuting for hours each day on the New York subway, he’d see “pressures from unemployment, separation, and eviction weighed heavy stop after stop … I’d wonder: Why isn’t economic growth more equitable?”

At Harvard, he dedicated himself to finding answers to that question.

In addition to his classroom studies on political economy, Singer completed fellowships with human rights groups and NGOs in India, South Africa, and France, and got a firsthand look at how politics and development intersect while working in the White House during an internship at the National Economic Council.

“Still, I noticed there were many struggling regions across America that national policies were not targeting, and subsequently began to focus my studies on the spatial dynamics of growth,” Singer said.

Singer plans to pursue two master’s degrees at Oxford, one in economics for development and a second in geography’s nature, society, and environment track.

Though he’s excited about his new opportunity, Singer knows it will be difficult to leave Cambridge and the many friends and mentors he has found at Harvard.

“I feel so grateful for my friends and professors here on campus. Many are my role models and inspiration, and I know I’m going to miss them.”

Katherine Warren
A 2013 graduate of Harvard, Warren is now at the U.S. Department of Health and Human Services in Washington, where she has continued her work on health services among Native American populations.

“I’m both stunned and thrilled to be selected, particularly with a good friend of mine, Elizabeth Byrne, as another winner,” Warren said.

At Oxford, Warren hopes to conduct research into the U.K.’s National Health Service as part of a project to investigate the “intersection of medicine and social forces of poverty, low education rates, segregation, and high unemployment that facilitate … acts of violence, with a particular focus on gender and indigenous health.”

“I see this as both as an honor and as a commitment to the many people who have shaped me and my work in the past,” she said. “I plan to go to Oxford to get a public health degree and then to bring it back to the many indigenous communities struggling with mental health, addiction, and suicide, particularly American Indians and Alaska natives. There is a lot of work to be done and a lot of wonderful people with whom I look forward to working.”

Created in 1902 by the will of British philanthropist Cecil Rhodes, the first class of American Rhodes Scholars entered Oxford in 1904. The scholarships cover all costs for two or three years of study at Oxford. Winners are selected on the basis of high academic achievement, personal integrity, leadership potential, and physical vigor, among other attributes.