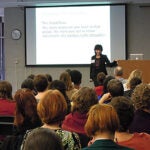 Fighting prejudice by admitting it

From 1946 to 1955, Bowie taught corporate and anti-trust law at Harvard Law School, with leaves of absence to serve as general counsel and special adviser to the U.S. high commissioner for Germany, John McCloy (1950-51), and as director of policy planning and assistant secretary of state under John Foster Dulles (1953-57). In this latter role he was a key figure in forging U.S. foreign policy during the Cold War.

Returning to Harvard in 1957, Bowie became the first holder of the Clarence Dillon Professorship, named for the father of C. Douglas Dillon, treasury secretary under presidents Kennedy and Johnson.

As founder and first director of the Center for International Affairs, Bowie presided over a distinguished group of scholars that included Edward Mason, Thomas Schelling, and Henry Kissinger. As director of the center, Bowie initiated a program to bring mid-career government officials from around the world to study at Harvard for a year, focusing on issues related to international affairs and foreign policy.

Bowie directed the Center for International Affairs until 1972. In 1977, he returned to Washington to serve as deputy director for national intelligence at the Central Intelligence Agency, a position he held until 1979. He retired from Harvard in 1980.

Born in Baltimore, Md., in 1909, Bowie earned an A.B. degree from Princeton in 1931 and an LL.B. from Harvard Law School in 1934. Bowie practiced law in Baltimore until 1942, when he joined the U.S. Army with the rank of captain. After the war, he became special assistant to General Lucius Clay, the deputy military governor for Germany, a post he held until 1946. On his 100th birthday the Federal Republic of Germany presented him with the Commander’s Cross of the Order of Merit for his work on Germany’s post-war integration in the West, Franco-German reconciliation, European integration, and German unification.

Bowie was predeceased by his wife of 62 years, Mary Theodosia Chapman Bowie, and is survived by two sons, Robert Jr. of Monkton, Md., and William Chapman of Springfield, Mass., and three grandchildren, Alice, Robert, and Peter.

In 1997, the Bowies moved to Blakehurst in Towson, Md., and were cared for in their final years by the staff at Chestnut Green. Funeral services will be held for family and friends Dec. 7 at 11 a.m. at the Old Wye Church in Wye Mills, Md.