Online, on site, in the field 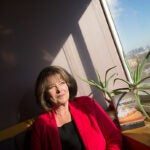 Harvard School of Public Health (HSPH) Dean Julio Frenk unveiled a new vision for public health education Friday, one that blends online, in-person, and in-the-field learning into a “modular” experience that individuals access at different times in their lives.

The new vision is needed, Frenk said, as public health seeks to meet the challenges of a changing world and build on the dramatic gains of the 20th century and the early years of the 21st. Those gains include the development of effective treatments for diseases that had plagued humankind for millennia, and rapid growth in life expectancy.

“This is our time of opportunity, and based on that, we developed a new strategy for the Harvard School of Public Health,” Frenk said.

Frenk’s comments came during the School’s “Second Century Symposium: Transforming Public Health Education,” which ran all day Friday at the Joseph B. Martin Conference Center at the Longwood campus in Boston. The event, which attracted 500 participants from more than 100 colleges and universities in 17 countries, was held to mark 100 years since the School’s founding in 1913 as the Harvard-MIT School for Health Officers.

The new vision for education at HSPH emerged from a three-year process of evaluating the past and looking to the future, Frenk said. As part of its plans, the School is launching a new doctorate program — with 3,000 inquiries already — and revamping its master’s in public health program.

President Drew Faust spoke at the event, saying that the course of public health through the last century is a striking — and rare — example of historical changes that had a large positive effect. That they were due to human agency and the intentional application of knowledge, she said, is even more stunning. She quoted an oft-repeated statement of Frenk’s: that the life span of Americans in the 20th century increased by 30 years, 25 of which were because of public health interventions.

“We here, most of us at least, are immunized against preventable diseases. We are less likely to die of coronary heart disease, more likely to understand the risks of tobacco, we have better sanitation, cleaner water, healthier babies, safer cars, food, and workplaces than when this institution originated a century ago,” Faust said. “It gives us a sense of opportunity and also responsibility. It makes me want to ask what will we all do in the next century that can rival the work — or, we hope, exceed — what was accomplished in the last.”

Faust identified access to health care as a major challenge for the coming decades but said that education of the health officers of the future is equally important, along with discoveries of new ways to fight disease.

“A lot rests on us as institutions of education,” Faust said. A good sign, she said, is growing interest by undergraduates in global health, which has become a popular secondary concentration — declared by some 250 students.

The School’s rethinking of education comes at a time of a broader reconsideration of higher education, driven by advances in cognitive science and in advancing technology, Frenk said.

Frenk described a shift in thinking about higher education toward a more “open architecture” where people move in and out of educational institutions at different times in their lives. He described a continuum of education for public health leadership in which students engage in more traditional education, return as fellows or in expanded executive education programs as they advance in their careers, and return again to teach and share experiences as senior leadership fellows.

Frenk also described a philosophy toward online learning that abandons the “which is better” discussion that has pitted online against on-site models. Instead, he outlined complementary roles, with online learning more appropriate for transmission of basic knowledge and in-person contact critical as learning expands beyond that.

“The idea is to achieve a harmonious balance between online, on-site, and in-field approaches … and moving out of the divisive discussions about which is the superior approach,” Frenk said.

Online education is picking up momentum through courses such as those HSPH offers through Harvard’s edX collaboration, with 150,000 students registered so far. A new type of online offering — a small, private online course, or SPOC — gives students a more intensive experience with greater interaction with instructors. A SPOC, for example, can have students watching lectures online on their own time and then discussing the material in class.