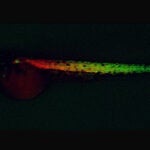 Along with being the hottest thing at the local multiplex, 3-D imaging has entered the laboratory as an important research tool.

Using an imaging technique known as high-speed holographic microscopy, Laurence Wilson, a fellow at Harvard’s Rowland Institute, worked with colleagues to produce detailed 3-D images of malaria sperm — the cells that reproduce inside infected mosquitoes — that shed new light on how the cells move. The work was described Nov. 5 in the Proceedings of the National Academy of Sciences.

“The working assumption was that this structure moved through a consistent clockwise beating,” Wilson said. “But what we found was, if you look at the malaria swimming, it doesn’t just move in a ‘right-handed’ way — it actually turns out to be a very general motor.

“The only way we could identify this was because we could see the 3-D structure,” he continued. “We could never do that before, and we found that there’s a whole zoo of shapes and waveforms it uses. What stuck out, however, was the idea that it does a right-handed stroke, then a left-handed stroke — so it relies on the strict alternation between the two.”

The hope, Wilson said, is that the research might illuminate how other, similarly constructed cells — such as cilia inside the lungs — are able to move. In addition, understanding how malaria parasites move may one day help scientists develop new strategies for combating the disease by halting its ability to reproduce.

Holographic microscopy creates a “stack” of images that can be processed by computers to create 3-D models. The raw data is acquired rapidly, allowing the sample to be imaged thousands of times per second in 3-D. This ability was key to imaging a fast-moving object such as the malaria sperm.

For researchers such as Wilson, the structure of malaria sperm is most compelling as an area of study.

As in similar cells, the malaria sperm is primarily built from a grouping of protein microtubules — nine pairs of tubes are arranged in a circle around a central pair, all of which are connected through radial spoke proteins. As the tubules move lengthwise against each other, the cell is able to produce waves along its length, propelling it forward.

“That’s how you get a sperm tail beating, or cilia beating in your lungs,” Wilson said. “The nice thing about malaria, however, is that from a mechanical point of view, it’s relatively primitive. Unlike other model systems we looked at — all of which have a head or cell body attached — malaria has no accessory mechanical structures. There’s only a cell membrane and some DNA arranged along its length.”

Holographic microscopy creates a “stack” of images that can be processed by computers to create three-dimensional models. The raw data is acquired rapidly, allowing the sample to be imaged thousands of times per second in 3-D. This ability was key to imaging a fast-moving object such as the malaria sperm.

“Holographic microscopy has been used for some time, but no one has tried to do exactly this sort of imaging before,” Wilson said. “No one has ever used it to look at the shape of something in this way, or in the same level of detail that we have.”

While the study gives researchers the clearest picture yet of how such cellular motors work, Wilson said studies are already in the works to get a better understanding of how they can go wrong, and what the consequences may be.

“The hope is if we know how this malaria sperm works, then when similar cellular motors go wrong, we can say why they’ve gone wrong,” Wilson said. “When these things go wrong in the human body, it can lead to problems like infertility and polycystic kidney disease — all sorts of unfortunate things can happen if these structures don’t work properly.”